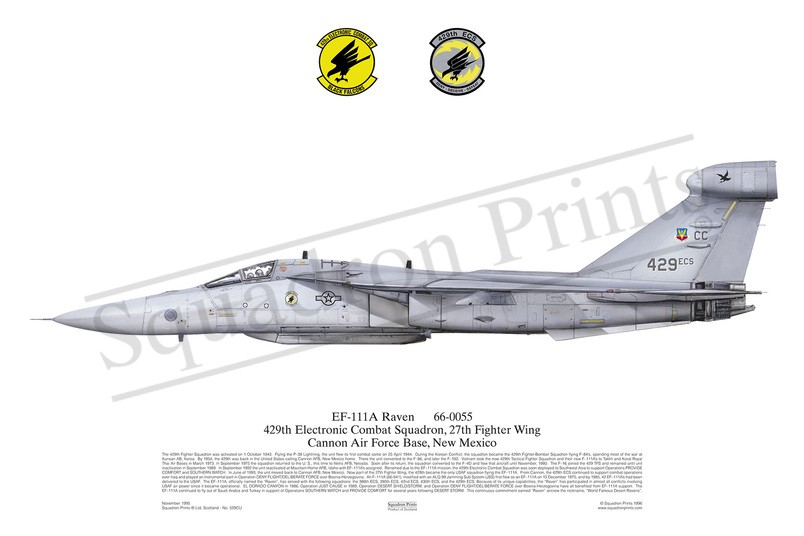 Squadron Prints Lithograph No. 529CU, EF-111A Raven, 66-0055 '429 ECS', 429th Electronic Combat Squadron, 27th Fighter Wing, Cannon AFB, New Mexico. The 429th Fighter Squadron was activated on 1 October 1943. Flying the P–38 Lightning, the unit flew its first combat sortie on 25 April 1944. During the Korean Conflict, the squadron became the 429th Fighter-Bomber Squadron flying F–84’s, spending most of the war at Kunsan AB, Korea. By 1954, the 429th was back in the United States calling Cannon AFB, New Mexico home. There the unit converted to the F–86, and later the F–100. Vietnam took the now 429th Tactical Fighter Squadron and their new F–111A’s to Takhli and Korat Royal Thai Air Bases in March 1973. In September 1975 the squadron returned to the U. S., this time to Nellis AFB, Nevada. Soon after its return, the squadron converted to the F–4D and flew that aircraft until November, 1980. The F–16 joined the 429 TFS and remained until unit inactivation in September 1989. In September 1992 the unit reactivated at Mountain Home AFB, Idaho with EF–111A’s assigned. Renamed due to the EF–111A mission, the 429th Electronic Combat Squadron was soon deployed to Southwest Asia to support Operations PROVIDE COMFORT and SOUTHERN WATCH. In June of 1993, the unit moved back to Cannon AFB, New Mexico. Now part of the 27th Fighter Wing, the 429th became the only USAF squadron flying the EF–111A. From Cannon, the 429th ECS continued to support combat operations over Iraq and played an instrumental part in Operation DENY FLIGHT/DELIBERATE FORCE over Bosnia-Herzegovina. An F–111A (66-041), modified with an ALQ-99 Jamming Sub System (JSS) first flew as an EF–111A on 15 December 1975, and by 1985, 42 EF–111A’s had been delivered to the USAF. The EF–111A, officially named the “Raven”, has served with the following squadrons: the 388th ECS, 390th ECS, 42nd ECS, 430th ECS, and the 429th ECS. Because of its unique capabilities, the “Raven” has participated in almost all conflicts involving USAF air power since it became operational. EL DORADO CANYON in 1986, Operation JUST CAUSE in 1989, Operation DESERT SHIELD/STORM, and Operation DENY FLIGHT/DELIBERATE FORCE over Bosnia-Herzegovina have all benefited from EF–111A support. The EF–111A continued to fly out of Saudi Arabia and Turkey in support of Operations SOUTHERN WATCH and PROVIDE COMFORT for several years following DESERT STORM. This continuous commitment earned “Raven” aircrew the nickname, “World Famous Desert Ravens”.