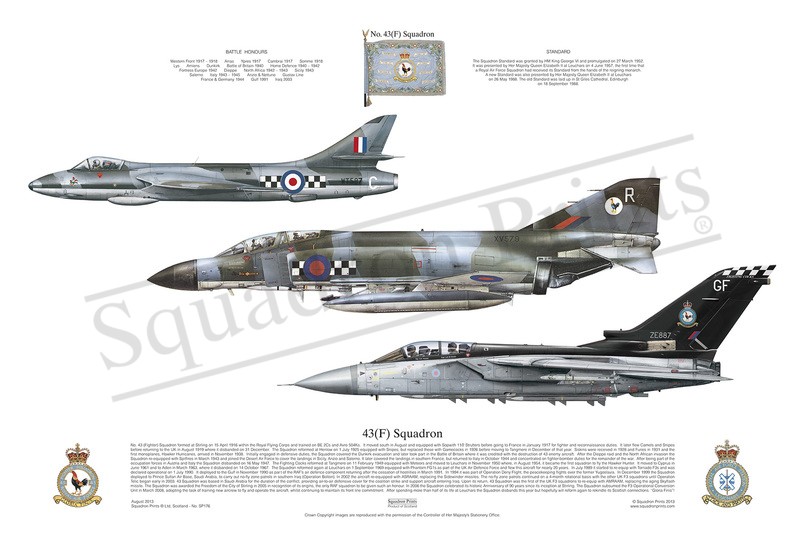 Squadron Prints Lithograph No. SP176 - Hunter F1, Phantom FG1 and Tornado F3, 43(F) Squadron. This print is a Limited Edition of 200 copies only. Please note that these prints will be shipped out after Leuchars Airshow on 7th September 2013. No. 43 (Fighter) Squadron formed at Stirling on 15 April 1916 within the Royal Flying Corps and trained on BE 2Cs and Avro 504Ks. It moved south in August and equipped with Sopwith 11⁄2 Strutters before going to France in January 1917 for fighter and reconnaissance duties. It later flew Camels and Snipes before returning to the UK in August 1919 where it disbanded on 31 December. The Squadron reformed at Henlow on 1 July 1925 equipped with Snipes, but replaced these with Gamecocks in 1926 before moving to Tangmere in December of that year. Siskins were received in 1928 and Furies in 1931 and the first monoplanes, Hawker Hurricanes, arrived in November 1938. Initially engaged in defensive duties, the Squadron covered the Dunkirk evacuation and later took part in the Battle of Britain where it was credited with the destruction of 43 enemy aircraft. After the Dieppe raid and the North African invasion the Squadron re-equipped with Spitfires in March 1943 and joined the Desert Air Force to cover the landings in Sicily, Anzio and Salerno. It later covered the landings in southern France, but returned to Italy in October 1944 and concentrated on fighter-bomber duties for the remainder of the war. After being part of the occupation forces in Austria and Italy the Squadron disbanded on 16 May 1947. The Fighting Cocks reformed at Tangmere on 11 February 1949 equipped with Meteors and moved to Leuchars in November 1950 where, in August 1954, it became the first squadron to fly the Hawker Hunter. It moved to Cyprus in June 1961 and to Aden in March 1963, where it disbanded on 14 October 1967. The Squadron reformed again at Leuchars on 1 September 1969 equipped with Phantom FG1s as part of the UK Air Defence Force and flew this aircraft for nearly 20 years. In July 1989 it started to re-equip with Tornado F3s and was declared operational on 1 July 1990. It deployed to the Gulf in November 1990 as part of the RAF’s air defence component returning after the cessation of hostilities in March 1991. In 1994 it was part of Operation Deny Flight, the peacekeeping flights over the former Yugoslavia. In December 1999 the Squadron deployed to Prince Sultan Air Base, Saudi Arabia, to carry out no-fly zone patrols in southern Iraq (Operation Bolton). In 2002 the aircraft re-equipped with ASRAAM, replacing the Sidewinder missiles. The no-fly zone patrols continued on a 4-month rotational basis with the other UK F3 squadrons until Operation Telic began early in 2003. 43 Squadron was based in Saudi Arabia for the duration of the conflict, providing air-to-air defensive cover for the coalition strike and support aircraft entering Iraq. Upon its return, 43 Squadron was the first of the UK F3 squadrons to re-equip with AMRAAM, replacing the aging Skyflash missile. The Squadron was awarded the Freedom of the City of Stirling in 2005 in recognition of its origins, the only RAF squadron to be given such an honour. In 2006 the Squadron celebrated its historic Anniversary of 90 years since its inception at Stirling. The Squadron subsumed the F3 Operational Conversion Unit in March 2008, adopting the task of training new aircrew to fly and operate the aircraft, whilst continuing to maintain its front line commitment. After spending more than half of its life at Leuchars the Squadron disbands this year but hopefully will reform again to rekindle its Scottish connections. “Gloria Finis”!