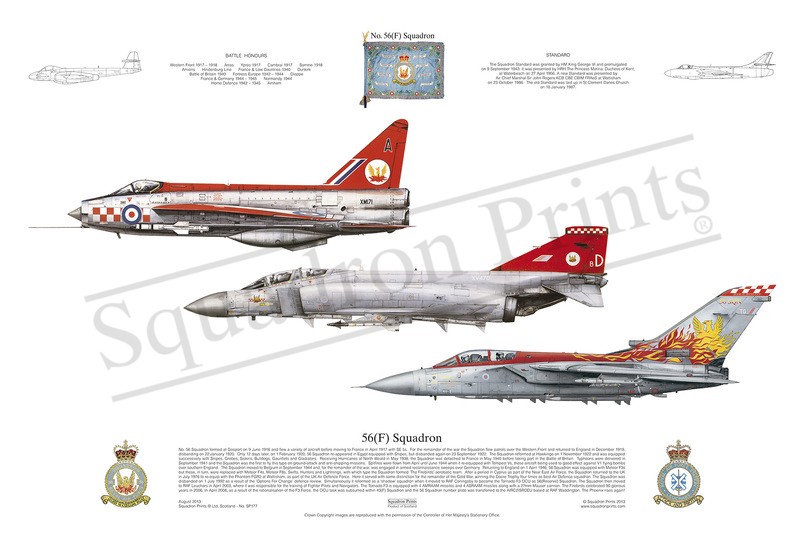 Squadron Prints Lithograph No. SP177 - Lightning F1A, Phantom FGR2 and Tornado F3, 56(F) Squadron. This print is a Limited Edition of 200 copies only. Please note that these prints will be shipped out after Leuchars Airshow on 7th September 2013. No. 56 Squadron formed at Gosport on 9 June 1916 and flew a variety of aircraft before moving to France in April 1917 with SE 5s. For the remainder of the war the Squadron flew patrols over the Western Front and returned to England in December 1919, disbanding on 22 January 1920. Only 12 days later, on 1 February 1920, 56 Squadron re-appeared in Egypt equipped with Snipes, but disbanded again on 23 September 1922. The Squadron reformed at Hawkinge on 1 November 1922 and was equipped successively with Snipes, Grebes, Siskins, Bulldogs, Gauntlets and Gladiators. Receiving Hurricanes at North Weald in May 1938, the Squadron was detached to France in May 1940 before taking part in the Battle of Britain. Typhoons were delivered in September 1941 and the Squadron was the first to fly this type on ground-attack and anti-shipping missions. Spitfires were flown from April until June 1944 when it re-equipped with Tempest Vs, these aircraft being used to good effect against V1 flying bombs over southern England. The Squadron moved to Belgium in September 1944 and, for the remainder of the war, was engaged in armed reconnaissance sweeps over Germany. Returning to England on 1 April 1946, 56 Squadron was equipped with Meteor F3s but these, in turn, were replaced with Meteor F4s, Meteor F8s, Swifts, Hunters and Lightnings, with which type the Squadron formed ‘The Firebirds’ aerobatic team. After a period in Cyprus as part of the Near East Air Force, the Squadron returned to the UK in July 1976 to re-equip with the Phantom FGR2 at Wattisham, as part of the UK Air Defence Force. Here it served with some distinction for the remainder of the Cold War, winning the Dacre Trophy four times as best Air Defence squadron. The Squadron was disbanded on 1 July 1992 as a result of the ‘Options For Change’ defence review. Simultaneously it reformed as a ‘shadow’ squadron when it moved to RAF Coningsby to become the Tornado F3 OCU as 56(Reserve) Squadron. The Squadron then moved to RAF Leuchars in April 2003, where it was responsible for the training of Fighter Pilots and Navigators. The Tornado F3 is equipped with 4 AMRAAM missiles and 4 ASRAAM missiles along with a 27mm Mauser cannon. The Firebirds celebrated 90 glorious years in 2006. In April 2008, as a result of the rationalisation of the F3 Force, the OCU task was subsumed within 43(F) Squadron and the 56 Squadron number plate was transferred to the AIRC2ISROEU based at RAF Waddington. The Phoenix rises again!