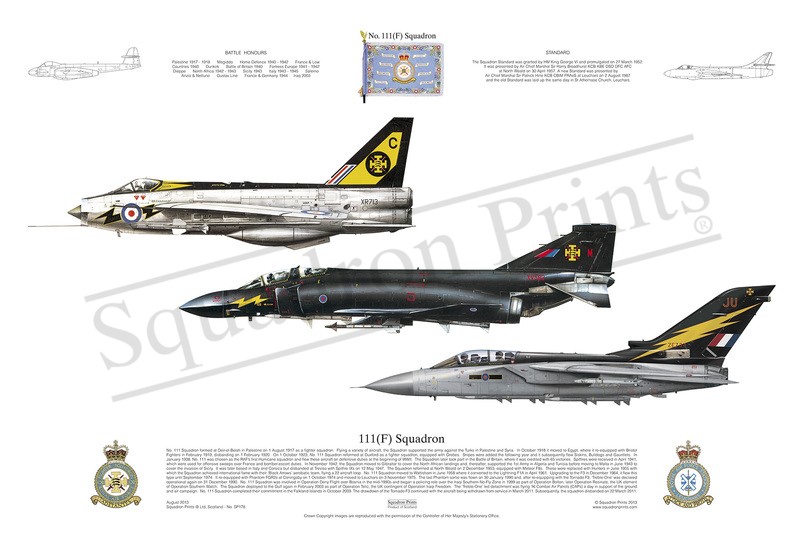 Squadron Prints Lithograph No. SP178 - Lightning F3, Phantom FG1 and Tornado F3, 111(F) Squadron. This print is a Limited Edition of 200 copies only. Please note that these prints will be shipped out after Leuchars Airshow on 7th September 2013. No. 111 Squadron formed at Deir-el-Belah in Palestine on 1 August 1917 as a fighter squadron. Flying a variety of aircraft, the Squadron supported the army against the Turks in Palestine and Syria. In October 1918 it moved to Egypt, where it re-equipped with Bristol Fighters in February 1919, disbanding on 1 February 1920. On 1 October 1923, No. 111 Squadron reformed at Duxford as a fighter squadron, equipped with Grebes. Snipes were added the following year and it subsequently flew Siskins, Bulldogs and Gauntlets. In January 1938, No. 111 was chosen as the RAF’s first Hurricane squadron and flew these aircraft on defensive duties at the beginning of WWII. The Squadron later took part in the Battle of Britain, where it was credited with 65 victories. Spitfires were received in April 1941, which were used for offensive sweeps over France and bomber-escort duties. In November 1942, the Squadron moved to Gibraltar to cover the North African landings and, thereafter, supported the 1st Army in Algeria and Tunisia before moving to Malta in June 1943 to cover the invasion of Sicily. It was later based in Italy and Corsica but disbanded at Treviso with Spitfire IXs on 12 May 1947. The Squadron reformed at North Weald on 2 December 1953, equipped with Meteor F8s. These were replaced with Hunters in June 1955 with which the Squadron achieved international fame with their ‘Black Arrows’ aerobatic team, flying a 22 aircraft loop. No. 111 Squadron moved to Wattisham in June 1958 where it converted to the Lightning F1A in April 1961. Upgrading to the F3 in December 1964, it flew this type until September 1974. It re-equipped with Phantom FGR2s at Coningsby on 1 October 1974 and moved to Leuchars on 3 November 1975. The last Phantom sortie was flown on 30 January 1990 and, after re-equipping with the Tornado F3, ‘Treble-One’ was declared operational again on 31 December 1990. No. 111 Squadron was involved in Operation Deny Flight over Bosnia in the mid-1990s and began a policing role over the Iraqi Southern No-Fly Zone in 1999 as part of Operation Bolton, later Operation Resinate, the UK element of Operation Southern Watch. The Squadron deployed to the Gulf again in February 2003 as part of Operation Telic, the UK contingent of Operation Iraqi Freedom. The ‘Treble-One’ led detachment was flying 16 Combat Air Patrols (CAPs) a day in support of the ground and air campaign. No. 111 Squadron completed their commitment in the Falkland Islands in October 2009. The drawdown of the Tornado F3 continued with the aircraft being withdrawn from service in March 2011. Subsequently, the squadron disbanded on 22 March 2011.­­­­­­­­­­­­­­­­­­­­­­­­­­­­­