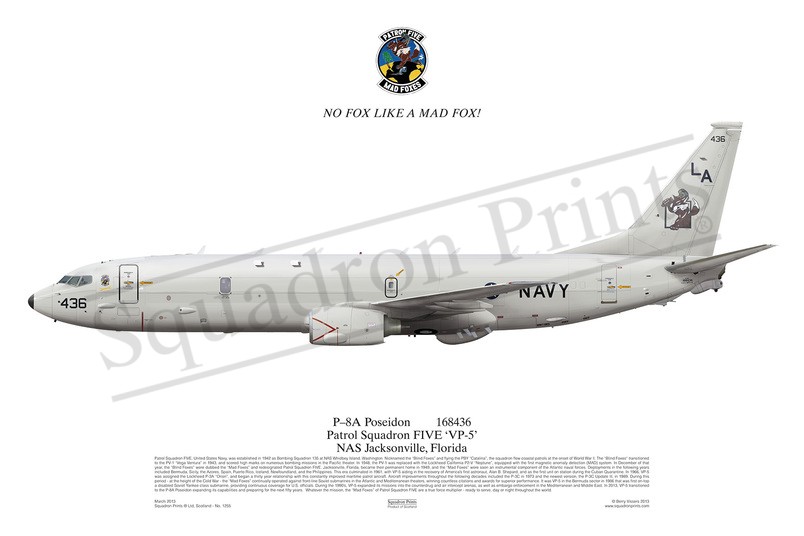 Squadron Prints Lithograph No. 1255 - P-8A Poseidon, 168436, Patrol Squadron FIVE \'VP-5\', NAS Jacksonville, Florida. \"No Fox Like a Mad Fox\". Patrol Squadron FlVE, United States Navy, was established in 1942 as Bombing Squadron 135 at NAS Whidbey Island, Washington. Nicknamed the “Blind Foxes” and flying the PBY “Catalina”, the squadron flew coastal patrols at the onset of World War ll. The “Blind Foxes“ transitioned to the PV-1 “Vega Ventura” in 1943, and scored high marks on numerous bombing missions in the Pacific theater. In 1948, the PV-1 was replaced with the Lockheed California P2-V “Neptune”, equipped with the first magnetic anomaly detection (MAD) system. In December of that year, the “Blind Foxes” were dubbed the “Mad Foxes” and redesignated Patrol Squadron FIVE. Jacksonville, Florida, became their permanent home in 1949, and the “Mad Foxes” were soon an instrumental component of the Atlantic naval forces. Deployments in the following years included Bermuda, Sicily, the Azores, Spain, Puerto Rico, Iceland, Newfoundland, and the Philippines. This era culminated in 1961, with VP-5 aiding in the recovery of America’s first astronaut, Alan B. Shepard, and as the first unit on station during the Cuban Quarantine. In 1966, VP-5 was assigned the Lockheed P-3A “Orion”, and began a thirty year relationship with this constantly improved maritime patrol aircraft. Aircraft improvements throughout the following decades included the P-3C in 1973 and the newest version, the P-3C Update Ill, in 1989. During this period - at the height of the Cold War - the “Mad Foxes” continually operated against front-line Soviet submarines in the Atlantic and Mediterranean theaters, winning countless citations and awards for superior performance. It was VP-5 in the Bermuda sector in 1986 that was first on-top a disabled Soviet Yankee class submarine, providing continuous coverage for U.S. officials. During the 1990’s, VP-5 expanded its missions into the counterdrug and air intercept arenas, as well as embargo enforcement in the Mediterranean and Middle East. In 2013, VP-5 transitioned to the P-8A Poseidon expanding its capabilities and preparing for the next fifty years. Whatever the mission, the “Mad Foxes” of Patrol Squadron FIVE are a true force multiplier - ready to serve, day or night throughout the world.