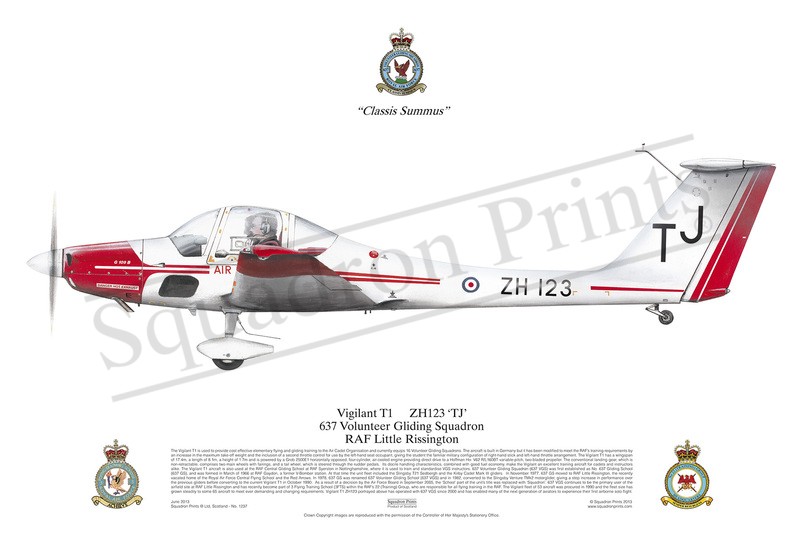 Squadron Prints - Lithograph No. 1237 - Vigilant T1, ZH123 \'TJ\', 637 Volunteer Gliding Squadron, RAF Little Rissington. The Vigilant T1 is used to provide cost effective elementary flying and gliding training to the Air Cadet Organisation and currently equips 16 Volunteer Gliding Squadrons. The aircraft is built in Germany but it has been modified to meet the RAF’s training requirements by an increase in the maximum take-off weight and the inclusion of a second throttle control for use by the left-hand seat occupant, giving the student the familiar military configuration of right-hand stick and left-hand throttle arrangement. The Vigilant T1 has a wingspan of 17.4m, a length of 8.1m, a height of 1.7m and is powered by a Grob 2500E1 horizontally opposed, four-cylinder, air-cooled engine providing direct drive to a Hoffman Ho- V62 R/L160BT variable-pitch, two-bladed propeller. The conventional landing gear, which is non-retractable, comprises two main wheels with fairings, and a tail wheel, which is steered through the rudder pedals. Its docile handling characteristics, combined with good fuel economy, make the Vigilant an excellent training aircraft for cadets and instructors alike. The Vigilant T1 aircraft is also used at the RAF Central Gliding School at RAF Syerston in Nottinghamshire, where it is used to train and standardise VGS instructors. 637 Volunteer Gliding Squadron (637 VGS) was first established as No. 637 Gliding School (637 GS), and was formed in March of 1966 at RAF Gaydon, a former V-Bomber station. At that time the unit fleet included the Slingsby T21 Sedbergh and the Kirby Cadet Mark III gliders. In November 1977, 637 GS moved to RAF Little Rissington, the recently vacated home of the Royal Air Force Central Flying School and the Red Arrows. In 1978, 637 GS was renamed 637 Volunteer Gliding School (637 VGS) and in 1982, converted to the Slingsby Venture TMk2 motorglider, giving a step increase in performance over the previous gliders before converting to the current Vigilant T1 in October 1990. As a result of a decision by the Air Force Board in September 2005, the ‘School’ part of the unit’s title was replaced with ‘Squadron’. 637 VGS continues to be the primary user of the airfield site at RAF Little Rissington and has recently become part of 3 Flying Training School (3FTS) within the RAF’s 22 (Training) Group, who are responsible for all flying training in the RAF. The Vigilant fleet of 53 aircraft was procured in 1990 and the fleet size has grown steadily to some 65 aircraft to meet ever demanding and changing requirements. Vigilant T1 ZH123 portrayed above has operated with 637 VGS since 2000 and has enabled many of the next generation of aviators to experience their first airborne solo flight.