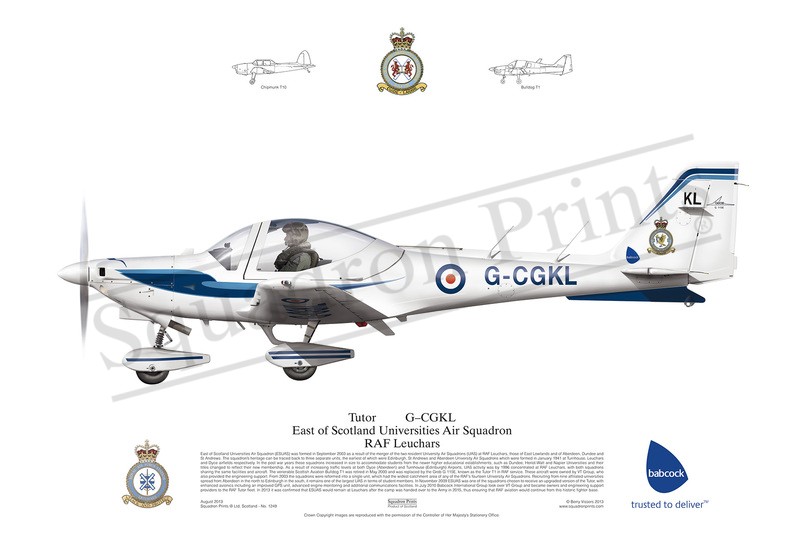 Squadron Prints - Lithograph No. 1249 - Tutor, G-CGKL, East of Scotland Universities Air Squadron, RAF Leuchars. East of Scotland Universities Air Squadron (ESUAS) was formed in September 2003 as a result of the merger of the two resident University Air Squadrons (UAS) at RAF Leuchars, those of East Lowlands and of Aberdeen, Dundee and St Andrews. The squadron’s heritage can be traced back to three separate units, the earliest of which were Edinburgh, St Andrews and Aberdeen University Air Squadrons which were formed in January 1941 at Turnhouse, Leuchars and Dyce airfields respectively. In the post war years these squadrons increased in size to accommodate students from the newer higher educational establishments, such as Dundee, Heriot-Watt and Napier Universities and their titles changed to reflect their new membership. As a result of increasing traffic levels at both Dyce (Aberdeen) and Turnhouse (Edinburgh) Airports, UAS activity was by 1996 concentrated at RAF Leuchars, with both squadrons sharing the same facilities and aircraft. The venerable Scottish Aviation Bulldog T1 was retired in May 2000 and was replaced by the Grob G 115E, known as the Tutor T1 in RAF service. These aircraft were owned by VT Group, who also provided the engineering support. From 2003 the squadrons were reformed into a single unit, which had the widest catchment area of any of the RAF’s fourteen University Air Squadrons. Recruiting from nine affiliated universities spread from Aberdeen in the north to Edinburgh in the south, it remains one of the largest UAS in terms of student members. In November 2009 ESUAS was one of the squadrons chosen to receive an upgraded version of the Tutor, with enhanced avionics including an improved GPS unit, advanced engine monitoring and additional communications facilities. In July 2010 Babcock International Group took over VT Group and became owners and engineering support providers to the RAF Tutor fleet. In 2013 it was confirmed that ESUAS would remain at Leuchars after the camp was handed over to the Army in 2015, thus ensuring that RAF aviation would continue from this historic fighter base.