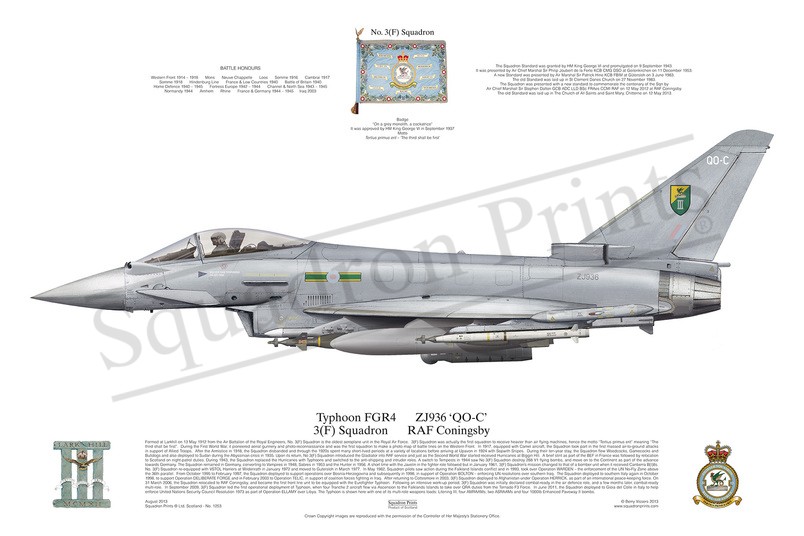 Squadron Prints Lithograph No. 1253 - Typhoon FGR4, ZJ936 \'QO-C\', 3(F) Squadron, RAF Coningsby. Formed at Larkhill on 13 May 1912 from the Air Battalion of the Royal Engineers, No. 3(F) Squadron is the oldest aeroplane unit in the Royal Air Force. 3(F) Squadron was actually the first squadron to receive heavier than air flying machines, hence the motto “Tertius primus erit” meaning “The third shall be first”. During the First World War, it pioneered aerial gunnery and photo-reconnaissance and was the first squadron to make a photo map of battle lines on the Western Front. In 1917, equipped with Camel aircraft, the Squadron took part in the first massed air-to-ground attacks in support of Allied Troops. After the Armistice in 1918, the Squadron disbanded and through the 1920s spent many short-lived periods at a variety of locations before arriving at Upavon in 1924 with Sopwith Snipes. During their ten-year stay, the Squadron flew Woodcocks, Gamecocks and Bulldogs and also deployed to Sudan during the Abyssinian crisis in 1935. Upon its return, No 3(F) Squadron introduced the Gladiator into RAF service and just as the Second World War started received Hurricanes at Biggin Hill. A brief stint as part of the BEF in France was followed by relocation to Scotland on night-patrol duties. During 1943, the Squadron replaced the Hurricanes with Typhoons and switched to the anti-shipping and intruder roles. A switch to Tempests in 1944 saw No 3(F) Squadron destroy 288 V1 flying bombs, and move on to the Continent as part of the advance towards Germany. The Squadron remained in Germany, converting to Vampires in 1948, Sabres in 1953 and the Hunter in 1956. A short time with the Javelin in the fighter role followed but in January 1961, 3(F) Squadron’s mission changed to that of a bomber unit when it received Canberra B(I)8s. No. 3(F) Squadron re-equipped with VSTOL Harriers at Wildenrath in January 1972 and moved to Gutersloh in March 1977. In May 1982, Squadron pilots saw action during the Falkland Islands conflict and in 1993, took over Operation WARDEN – the enforcement of the UN No-Fly Zone above the 36th parallel. From October 1995 to February 1997, the Squadron deployed to support operations over Bosnia-Herzegovina and subsequently in 1998, in support of Operation BOLTON – enforcing UN resolutions over southern Iraq. The Squadron deployed to southern Italy again in October 1998, to support Operation DELIBERATE FORGE and in February 2003 to Operation TELIC, in support of coalition forces fighting in Iraq. After returning to Cottesmore in 2003, 3(F) Squadron deployed to Afghanistan under Operation HERRICK, as part of an international peace-keeping force. On 31 March 2006, the Squadron relocated to RAF Coningsby, and became the first front line unit to be equipped with the Eurofighter Typhoon. Following an intensive work-up period, 3(F) Squadron was initially declared combat-ready in the air defence role, and a few months later, combat-ready multi-role. In September 2009, 3(F) Squadron led the first operational deployment of Typhoon, when four Tranche 2 aircraft flew via Ascension to the Falklands Islands to take over QRA duties from the Tornado F3 Force. In June 2011, the Squadron deployed to Gioia del Colle in Italy to help enforce United Nations Security Council Resolution 1973 as part of Operation ELLAMY over Libya. The Typhoon is shown here with one of its multi-role weapons loads: Litening III; four AMRAAMs; two ASRAAMs and four 1000lb Enhanced Paveway II bombs.