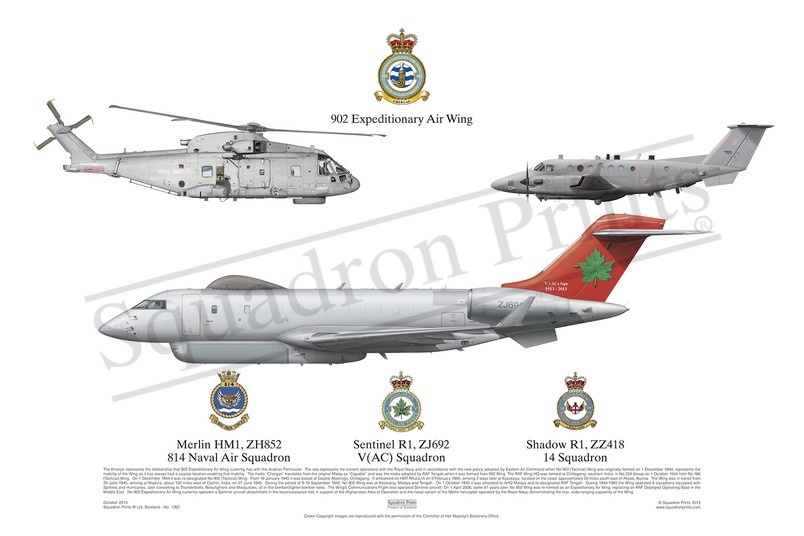 Squadron Prints Lithograph No. 1262, 902 Expeditionary Air Wing, Sentinel R1, ZJ692, V(AC) Squadron, Merlin HM1, ZH852, 814 Naval Air Squadron, Shadow R1, ZZ418, 14 Squadron. The Khanjar represents the relationship that 902 Expeditionary Air Wing currently has with the Arabian Peninsular. The sea represents the current operations with the Royal Navy and in accordance with the new policy adopted by Eastern Air Command when No 902 (Tactical) Wing was originally formed on 1 December 1944, represents the mobility of the Wing as it has always had a coastal location enabling that mobility. The motto “Chergas” translates from the original Malay as “Capable” and was the motto adopted by RAF Tengah when it was formed from 902 Wing. The RAF Wing HQ was formed at Chittagong, southern India, in No 224 Group on 1 October 1944 from No 166 (Tactical) Wing. On 1 December 1944 it was re-designated No 902 (Tactical) Wing. From 16 January 1945 it was based at Double Moorings, Chittagong. It embarked on HMT RAJULIA on 9 February 1945, arriving 2 days later at Kyaukpyu, located on the coast approximately 55 miles south-east of Akyab, Burma. The Wing was in transit from 20 June 1945, arriving at Madura, about 100 miles west of Cochin, India, on 27 June 1945. During the period of 9-19 September 1945, No 902 Wing was at Kelanang, Malaya and Tengah. On 1 October 1945 it was allocated to AHQ Malaya and re-designated RAF Tengah. During 1944-1945 the Wing operated 6 squadrons equipped with Spitfires and Hurricanes, later converting to Thunderbolts, Beaufighters and Mosquitoes, all in the bomber/fighter-bomber roles. The Wing’s Communications Flight also operated Sentinel aircraft. On 1 April 2006, some 61 years later, No 902 Wing was re-formed as an Expeditionary Air Wing, replacing an RAF Deployed Operating Base in the Middle East. No 902 Expeditionary Air Wing currently operates a Sentinel aircraft detachment in the reconnaissance role in support of the Afghanistan Area of Operation and the naval variant of the Merlin helicopter operated by the Royal Navy, demonstrating the true, wide-ranging capability of the Wing.