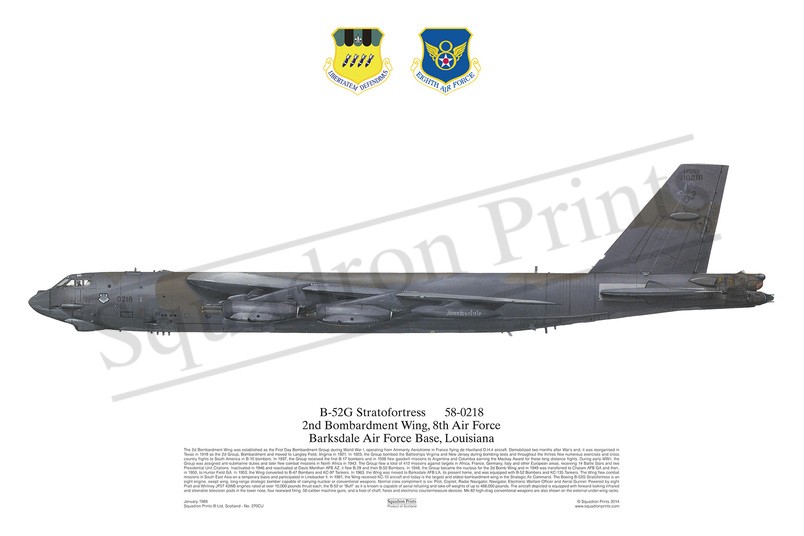 Squadron Prints Lithograph No. 270CU - B-52G Stratofortress, 58-0218, 2nd Bombardment Wing, 8th Air Force, Barksdale Air Force Base, Louisiana. The 2d Bombardment Wing was established as the First Day Bombardment Group during World War I, operating from Ammanty Aerodrome in France flying de Havilland D.H.4 aircraft. Demobilized two months after War‘s end, it was reorganised in Texas in 1919 as the 2d Group, Bombardment and moved to Langley Field, Virginia in 1921. In 1923, the Group bombed the Battleships Virginia and New Jersey during bombing tests and throughout the thirties flew numerous exercises and cross country flights to South America in B-10 bombers. In 1937, the Group received the first B-17 bombers and in 1938 flew goodwill missions to Argentina and Columbia earning the Mackay Award for these long distance flights. During early WWII, the Group was assigned anti-submarine duties and later ﬂew combat missions in North Africa in 1943. The Group ﬂew a total of 412 missions against targets in Africa, France, Germany, Italy and other European areas, receiving 14 Battle Stars and two Presidential Unit Citations. Inactivated in 1946 and reactivated at Davis Monthan AFB AZ, it flew B-29 and then B-50 Bombers. In 1948, the Group became the nucleus for the 2d Bomb Wing and in 1949 was transferred to Chatam AFB GA and then, in 1950, to Hunter Field GA. In 1953, the Wing converted to B-47 Bombers and KC-97 Tankers. In 1963, the Wing was moved to Barksdale AFB LA, its present home, and was equipped with B-52 Bombers and KC-135 Tankers. The Wing ﬂew combat missions in South East Asia on a temporary basis and participated in Linebacker ll. In 1981, the Wing received KC-10 aircraft and today is the largest and oldest bombardment wing in the Strategic Air Command. The Boeing B-52G Stratofortress is an eight engine, swept wing, long-range strategic bomber capable of carrying nuclear or conventional weapons. Normal crew compliment is six: Pilot, Copilot, Radar Navigator, Navigator, Electronic Warfare Ofﬁcer and Aerial Gunner. Powered by eight Pratt and Whitney JP57 43WB engines rated at over 10,000 pounds thrust each, the B-52 or “Buff” as it is known is capable of aerial refueling and take-off weights of up to 488,000 pounds. The aircraft depicted is equipped with forward looking infrared and steerable television pods in the lower nose, four rearward ﬁring .50 caliber machine guns, and a host of chaff, flares and electronic countermeasure devices. Mk-82 high-drag conventional weapons are also shown on the external under-wing racks.