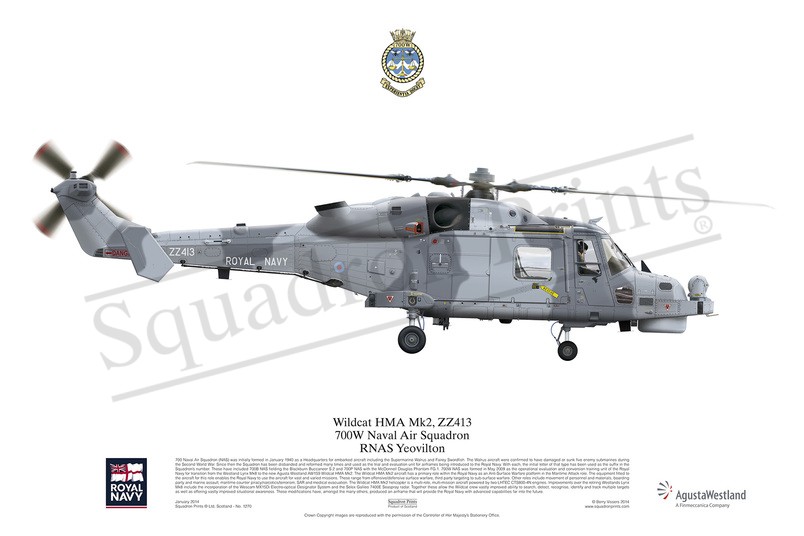 Squadron Prints Lithograph No. 1270 - Wildcat HMA Mk2, ZZ413, 700W Naval Air Squadron, RNAS Yeovilton. 700 Naval Air Squadron (NAS) was initially formed in January 1940 as a Headquarters for embarked aircraft including the Supermarine Walrus and Fairey Swordfish. The Walrus aircraft were confirmed to have damaged or sunk five enemy submarines during the Second World War. Since then the Squadron has been disbanded and reformed many times and used as the trial and evaluation unit for airframes being introduced to the Royal Navy. With each, the initial letter of that type has been used as the suffix in the Squadron’s number. These have included 700B NAS fielding the Blackburn Buccaneer S.2 and 700P NAS with the McDonnell Douglas Phantom FG.1. 700W NAS was formed in May 2009 as the operational evaluation and conversion training unit of the Royal Navy for transition from the Westland Lynx Mk8 to the new Agusta Westland AW159 Wildcat HMA Mk2. The Wildcat HMA Mk2 aircraft has a primary role within the Royal Navy as an Anti-Surface Warfare platform in the Maritime Attack role. The equipment fitted to the aircraft for this role enables the Royal Navy to use the aircraft for vast and varied missions. These range from offensive/defensive surface warfare, third party targeting to sub-surface warfare. Other roles include movement of personnel and materials, boarding party and marine assault, maritime counter piracy/narcotics/terrorism, SAR and medical evacuation. The Wildcat HMA Mk2 helicopter is a multi-role, multi-mission aircraft powered by two LHTEC CTS800-4N engines. Improvements over the retiring Westlands Lynx Mk8 include the incorporation of the Wescam MX15Di Electro-optical Designator System and the Selex Galileo 7400E Seaspray radar. Together these allow the Wildcat crew vastly improved ability to search, detect, recognise, identify and track multiple targets as well as offering vastly improved situational awareness. These modifications have, amongst the many others, produced an airframe that will provide the Royal Navy with advanced capabilities far into the future.