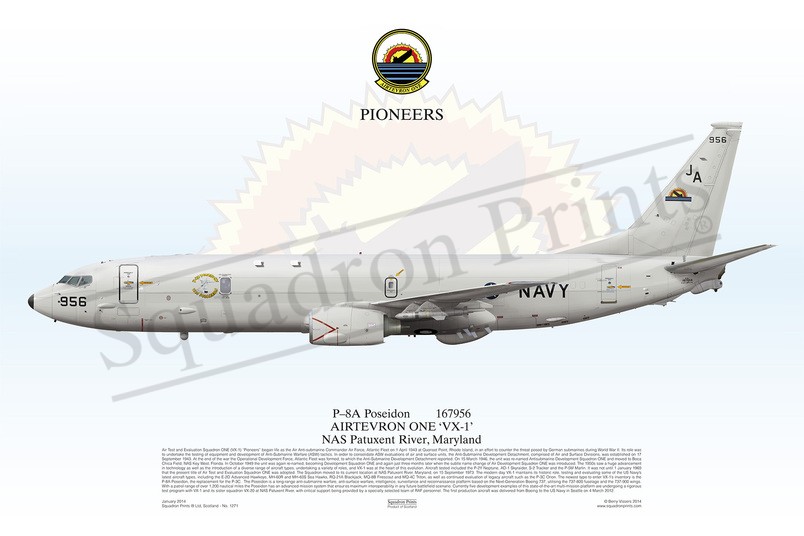 Squadron Prints Lithograph No. 1271 - P-8A Poseidon, 167956, AIRTEVRON ONE \'VX-1\', NAS Patuxent River, Maryland. Air Test and Evaluation Squadron ONE (VX-1) “Pioneers” began life as the Air Anti-submarine Commander Air Force, Atlantic Fleet on 1 April 1943 at Quonset Point, Rhode Island, in an effort to counter the threat posed by German submarines during World War II. Its role was to undertake the testing of equipment and development of Anti-Submarine Warfare (ASW) tactics. In order to consolidate ASW evaluations of air and surface units, the Anti-Submarine Development Detachment, comprised of Air and Surface Divisions, was established on 17 September 1943. At the end of the war the Operational Development Force, Atlantic Fleet was formed, to which the Anti-Submarine Development Detachment reported. On 15 March 1946, the unit was re-named Antisubmarine Development Squadron ONE and moved to Boca Chica Field, NAS Key West, Florida. In October 1949 the unit was again re-named, becoming Development Squadron ONE and again just three months later when the subtle name change of Air Development Squadron ONE was introduced. The 1950s saw a huge advancement in technology as well as the introduction of a diverse range of aircraft types, undertaking a variety of roles, and VX-1 was at the heart of this evolution. Aircraft tested included the P-2Y Neptune, AD-1 Skyraider, S-2 Tracker and the P-5M Marlin. It was not until 1 January 1969 that the present title of Air Test and Evaluation Squadron ONE was adopted. The Squadron moved to its current location at NAS Patuxent River, Maryland, on 15 September 1973. The modern day VX-1 maintains its historic role, testing and evaluating some of the US Navy’s latest aircraft types, including the E-2D Advanced Hawkeye, MH-60R and MH-60S Sea Hawks, RQ-21A Blackjack, MQ-8B Firescout and MQ-4C Triton, as well as continued evaluation of legacy aircraft such as the P-3C Orion. The newest type to enter VX-1’s inventory is the P-8A Poseidon, the replacement for the P-3C. The Poseidon is a long-range anti-submarine warfare, anti-surface warfare, intelligence, surveillance and reconnaissance platform based on the Next-Generation Boeing 737, utilising the 737-800 fuselage and the 737-900 wings. With a patrol range of over 1,200 nautical miles the Poseidon has an advanced mission system that ensures maximum interoperability in any future battlefield scenario. Currently five development examples of this state-of-the-art multi-mission platform are undergoing a rigorous test program with VX-1 and its sister squadron VX-20 at NAS Patuxent River, with critical support being provided by a specially selected team of RAF personnel. The first production aircraft was delivered from Boeing to the US Navy in Seattle on 4 March 2012.