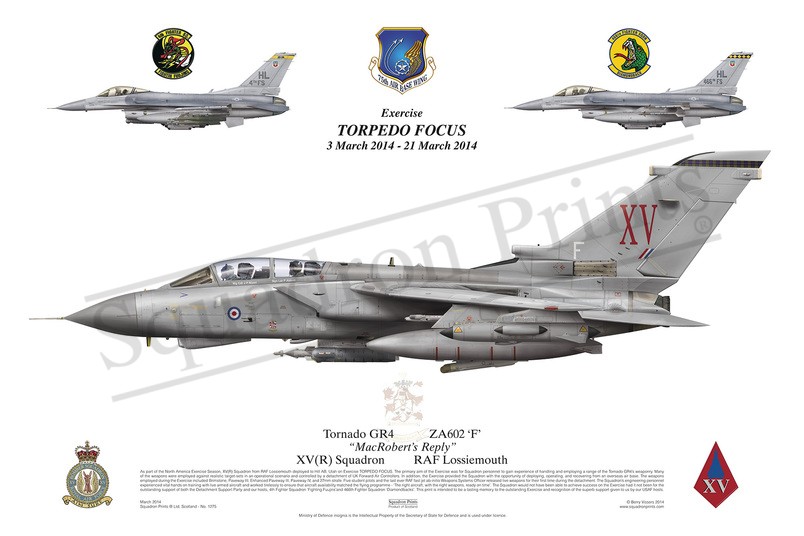 Squadron Prints Lithograph No. 1275 - Tornado GR4, ZA602 \'F\' \"MacRobert\'s Reply\", XV(R) Squadron, RAF Lossiemouth. As part of the North America Exercise Season, XV(R) Squadron from RAF Lossiemouth deployed to Hill AB, Utah on Exercise TORPEDO FOCUS. The primary aim of the Exercise was for Squadron personnel to gain experience of handling and employing a range of the Tornado GR4’s weaponry. Many of the weapons were employed against realistic target-sets in an operational scenario and controlled by a detachment of UK Forward Air Controllers. In addition, the Exercise provided the Squadron with the opportunity of deploying, operating, and recovering from an overseas air base. The weapons employed during the Exercise included Brimstone, Paveway III, Enhanced Paveway III, Paveway IV, and 27mm strafe. Five student pilots and the last ever RAF fast jet ab-initio Weapons Systems Officer released live weapons for their first time during the detachment. The Squadron’s engineering personnel experienced vital hands on training with live armed aircraft and worked tirelessly to ensure that aircraft availability matched the flying programme - ‘The right aircraft, with the right weapons, ready on time’. The Squadron would not have been able to achieve success on the Exercise had it not been for the outstanding support of both the Detachment Support Party and our hosts, 4th Fighter Squadron ‘Fighting Fuujins’and 466th Fighter Squadron ‘Diamondbacks’. This print is intended to be a lasting memory to the outstanding Exercise and recognition of the superb support given to us by our USAF hosts.