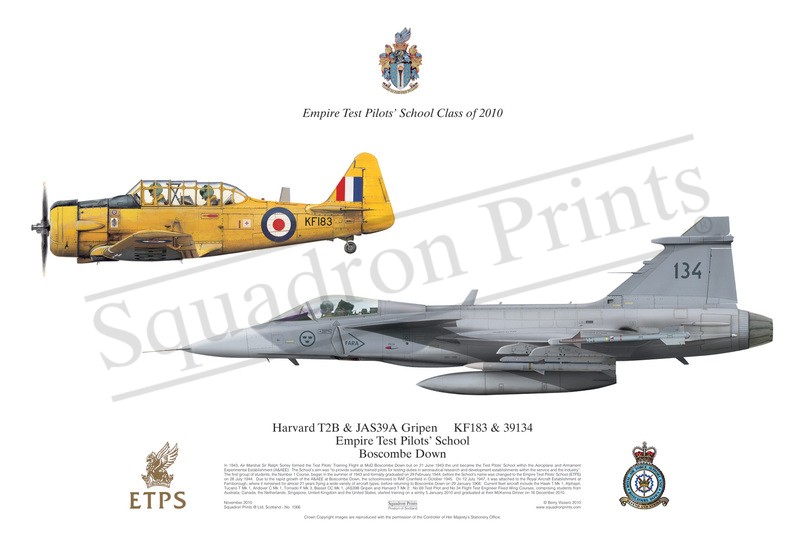 Squadron Prints Lithograph No. 1066 - Harvard T2, KF183 and JAS39A Gripen 39134, Empire Test Pilots\' School, Boscombe Down. In 1943, Air Marshal Sir Ralph Sorley formed the Test Pilots’ Training Flight at MoD Boscombe Down but on 21 June 1943 the unit became the Test Pilots’ School within the Aeroplane and Armament Experimental Establishment (A&AEE). The School’s aim was “to provide suitably trained pilots for testing duties in aeronautical research and development establishments within the service and the industry”. The first group of students, the Number 1 Course, began in the summer of 1943 and formally graduated on 29 February 1944, before the School’s name was changed to the Empire Test Pilots’ School (ETPS) on 28 July 1944. Due to the rapid growth of the A&AEE at Boscombe Down, the schoolmoved to RAF Cranfield in October 1945. On 12 July 1947, it was attached to the Royal Aircraft Establishment at Farnborough, where it remained for almost 21 years flying a wide variety of aircraft types, before returning to Boscombe Down on 29 January 1968. Current fleet aircraft include the Hawk T Mk 1, Alphajet, Tucano T Mk 1, Andover C Mk 1, Tornado F Mk 3, Basset CC Mk 1, JAS39B Gripen and Harvard T Mk 2. No 69 Test Pilot and No 34 Flight Test Engineer Fixed Wing Courses, comprising students from Australia, Canada, the Netherlands, Singapore, United Kingdom and the United States, started training on a wintry 5 January 2010 and graduated at their McKenna Dinner on 16 December 2010.