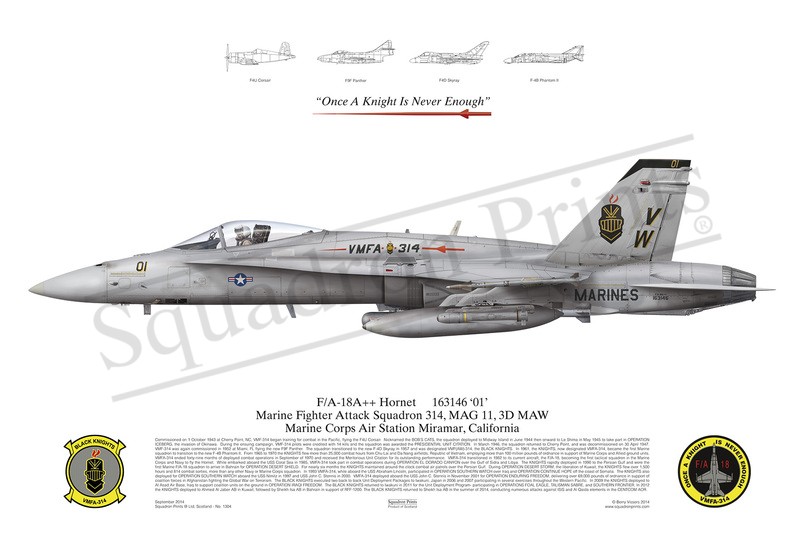 Squadron Prints Lithograph No. 1304 - F/A-18A++ Hornet, 163146 \'01\', Marine Fighter Attack Squadron 314, MAG11, 3d MAW, MCAS Miramar, California. Commissioned on 1 October 1943 at Cherry Point, NC, VMF-314 began training for combat in the Pacific, flying the F4U Corsair. Nicknamed the BOB’S CATS, the squadron deployed to Midway Island in June 1944 then onward to Le Shima in May 1945 to take part in OPERATION ICEBERG, the invasion of Okinawa. During the ensuing campaign, VMF-314 pilots were credited with 14 kills and the squadron was awarded the PRESIDENTIAL UNIT CITATION. In March 1946, the squadron returned to Cherry Point, and was decommissioned on 30 April 1947. VMF-314 was again commissioned in 1952 at Miami, FL flying the new F9F Panther. The squadron transitioned to the new F-4D Skyray in 1957 and was designated VMF(AW)-314, the BLACK KNIGHTS. In 1961, the KNIGHTS, now designated VMFA-314, became the first Marine squadron to transition to the new F-4B Phantom II. From 1965 to 1970 the KNIGHTS flew more than 25,000 combat hours from Chu Lai and Da Nang airfields, Republic of Vietnam, employing more than 100 million pounds of ordnance in support of Marine Corps and Allied ground units. VMFA-314 ended forty-nine months of deployed combat operations in September of 1970 and received the Meritorious Unit Citation for its outstanding performance. VMFA-314 transitioned in 1982 to its current aircraft, the F/A-18, becoming the first tactical squadron in the Marine Corps and Navy to fly the Hornet. While embarked aboard the USS Coral Sea in 1985, VMFA-314 took part in combat operations during OPERATION EL DORADO CANYON over the Gulf of Sidra and Libya. The KNIGHTS rapidly deployed in 1990 to the Persian Gulf and were the first Marine F/A-18 squadron to arrive in Bahrain for OPERATION DESERT SHIELD. For nearly six months the KNIGHTS maintained around the clock combat air patrols over the Persian Gulf. During OPERATION DESERT STORM, the liberation of Kuwait, the KNIGHTS flew over 1,500 hours and 814 combat sorties, more than any other Navy or Marine Corps squadron. In 1993 VMFA-314, while aboard the USS Abraham Lincoln, participated in OPERATION SOUTHERN WATCH over Iraq and OPERATION CONTINUE HOPE off the coast of Somalia. The KNIGHTS also deployed for OPERATION SOUTHERN WATCH aboard the USS Nimitz in 1997 and USS John C. Stennis in 2000. VMFA-314 deployed aboard the USS John C. Stennis in November 2001 for OPERATION ENDURING FREEDOM, delivering over 69,000 pounds of ordnance in support of coalition forces in Afghanistan fighting the Global War on Terrorism. The BLACK KNIGHTS executed two back to back Unit Deployment Packages to Iwakuni, Japan in 2006 and 2007 participating in several exercises throughout the Western Pacific. In 2009 the KNIGHTS deployed to Al Asad Air Base, Iraq to support coalition units on the ground in OPERATION IRAQI FREEDOM. The BLACK KNIGHTS returned to Iwakuni in 2011 for the Unit Deployment Program- participating in OPERATIONS FOAL EAGLE, TALISMAN SABRE, and SOUTHERN FRONTIER. In 2012 the KNIGHTS deployed to Ahmed Al Jaber AB in Kuwait, followed by Sheikh Isa AB in Bahrain in support of RFF-1200. The BLACK KNIGHTS returned to Sheikh Isa AB in the summer of 2014, conducting numerous attacks against ISIS and Al Qaida elements in the CENTCOM AOR.