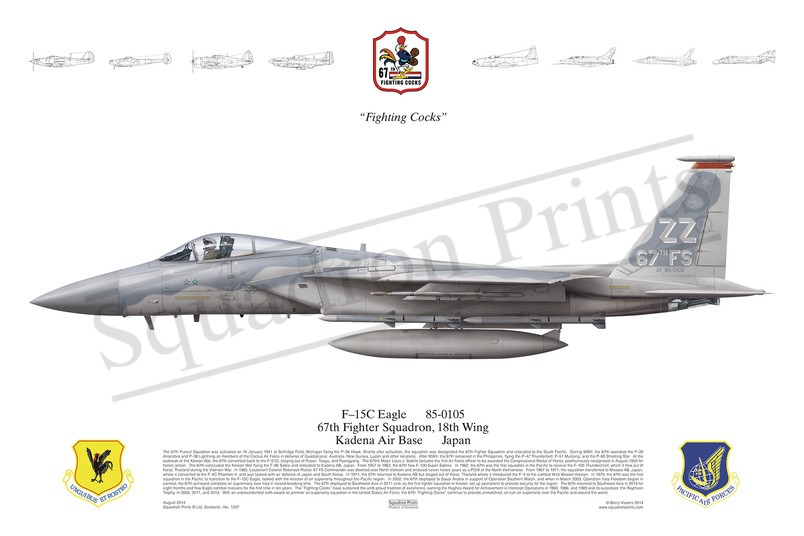 Squadron Prints Lithograph No. 1307 - F-15C Eagle, 85-0105 \'67 FS\', 67th Fighter Squadron, 18th Wing, Kadena AB, Japan. The 67th Pursuit Squadron was activated on 15 January 1941 at Selfridge Field, Michigan flying the P–36 Hawk. Shortly after activation, the squadron was designated the 67th Fighter Squadron and relocated to the South Pacific. During WWII, the 67th operated the P–39 Airacobra and P–38 Lightning as members of the Cactus Air Force in defense of Guadalcanal, Australia, New Guinea, Luzon and other locations. After WWII, the 67th remained in the Philippines, flying the P–47 Thunderbolt, P–51 Mustang, and the P–80 Shooting Star. At the outbreak of the Korean War, the 67th converted back to the F–51D, staging out of Pusan, Taegu, and Pyongyang. The 67th’s Major Louis J. Sebille became the first Air Force officer to be awarded the Congressional Medal of Honor, posthumously recognized in August 1950 for heroic action. The 67th concluded the Korean War flying the F–86 Sabre and relocated to Kadena AB, Japan. From 1957 to 1962, the 67th flew F–100 Super Sabres. In 1962, the 67th was the first squadron in the Pacific to receive the F–105 Thunderchief, which it flew out of Korat, Thailand during the Vietnam War. In 1965, Lieutenant Colonel Robinson Risner, 67 FS Commander was downed over North Vietnam and endured seven heroic years as a POW of the North Vietnamese. From 1967 to 1971, the squadron transferred to Misawa AB, Japan, where it converted to the F–4C Phantom II, and was tasked with air defense of Japan and South Korea. In 1971, the 67th returned to Kadena AB but staged out of Korat, Thailand where it introduced the F–4 to the combat Wild Weasel mission. In 1979, the 67th was the first squadron in the Pacific to transition to the F–15C Eagle, tasked with the mission of air superiority throughout the Pacific region. In 2002, the 67th deployed to Saudi Arabia in support of Operation Southern Watch, and when in March 2003, Operation Iraqi Freedom began in earnest, the 67th achieved complete air supremacy over Iraq in record-breaking time. The 67th deployed to Southwest Asia in 2011 and, as the first fighter squadron in theater, set up operations to provide security for the region. The 67th returned to Southwest Asia in 2013 for eight months and flew Eagle combat missions for the first time in ten years. The “Fighting Cocks” have sustained the unit’s proud tradition of excellence, earning the Hughes Award for Achievement in Intercept Operations in 1983, 1986, and 1989 and its successor, the Raytheon Trophy, in 2003, 2011, and 2013. With an unprecedented sixth award as premier air-superiority squadron in the United States Air Force, the 67th “Fighting Cocks” continue to provide unmatched, on-call air superiority over the Pacific and around the world.