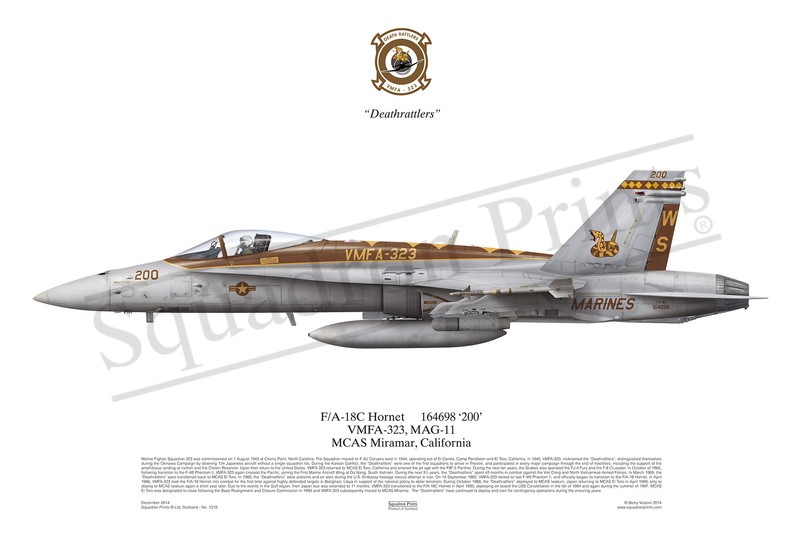 Squadron Prints Lithograph No. 1318 - F/A-18C Hornet, 164698 \'200\', VMFA-323, MAG-11, MCAS Miramar. Marine Fighter Squadron 323 was commissioned on 1 August 1943 at Cherry Point, North Carolina. The Squadron moved its F-4U Corsairs west in 1944, operating out of El Centro, Camp Pendleton and El Toro, California. In 1945, VMFA-323, nicknamed the “Deathrattlers”, distinguished themselves during the Okinawa Campaign by downing 124 Japanese aircraft without a single squadron los. During the Korean Conflict, the “Deathrattlers” were one of the first squadrons to arrive in Theatre, and participated in every major campaign through the end of hostilities, including the support of the amphibious landing at Inchon and the Chosin Reservoir. Upon their return to the United States, VMFA-323 returned to MCAS El Toro, California and entered the jet age with the F9F-5 Panther. During the next ten years, the Snakes also operated the FJ-4 Fury and the F-8 Crusader. In October of 1965, following transition to the F-4B Phantom II, VMFA-323 again crossed the Pacific, joining the First Marine Aircraft Wing at Da Nang, South Vietnam. During the next 3½ years, the “Deathrattlers” spent 43 months in combat against the Viet Cong and North Vietnamese Armed Forces. In March 1969, the “Deathrattlers” were transferred back to MCAS El Toro. In 1980, the “Deathrattlers” were airborne and on alert during the U.S. Embassy hostage rescue attempt in Iran. On 14 September 1982, VMFA-323 retired its last F-4N Phantom II, and officially began its transition to the F/A-18 Hornet. In April 1986, VMFA-323 took the F/A-18 Hornet into combat for the first time against highly defended targets in Benghazi, Libya in support of the national policy to deter terrorism. During October 1988, the “Deathrattlers” deployed to MCAS Iwakuni, Japan returning to MCAS El Toro in April 1989, only to deploy to MCAS Iwakuni again a short year later. Due to the events in the Gulf region, their Japan tour was extended to 11 months. VMFA-323 transitioned to the F/A-18C Hornet in April 1993, deploying on board the USS Constellation in the fall of 1994 and again during the summer of 1997. MCAS El Toro was designated to close following the Base Realignment and Closure Commission in 1993 and VMFA-323 subsequently moved to MCAS Miramar. The “Deathrattlers” have continued to deploy and train for contingency operations during the ensuring years.