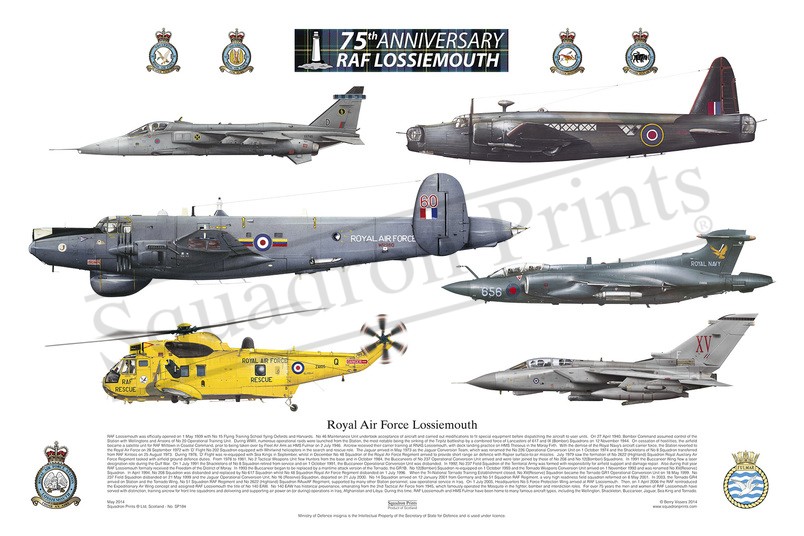 Squadron Prints Lithograph No. SP184 - 75th Anniversary RAF Lossiemouth. RAF Lossiemouth was officially opened on 1 May 1939 with No 15 Flying Training School flying Oxfords and Harvards. No 46 Maintenance Unit undertook acceptance of aircraft and carried out modifications to fit special equipment before dispatching the aircraft to user units. On 27 April 1940, Bomber Command assumed control of the Station with Wellingtons and Ansons of No 20 Operational Training Unit. During WWII, numerous operational raids were launched from the Station, the most notable being the sinking of the Tirpitz battleship by a combined force of Lancasters of 617 and IX (Bomber) Squadrons on 12 November 1944. On cessation of hostilities, the airfield became a satellite unit for RAF Milltown in Coastal Command, prior to being taken over by Fleet Air Arm as HMS Fulmar on 2 July 1946. Aircrew received their carrier training at RNAS Lossiemouth, with deck landing practice on HMS Theseus in the Moray Firth. With the demise of the Royal Navy’s aircraft carrier force, the Station reverted to the Royal Air Force on 28 September 1972 with ‘D’ Flight No 202 Squadron equipped with Whirlwind helicopters in the search and rescue role. The Jaguar arrived in May 1973 as the Jaguar Conversion Team, which was renamed the No 226 Operational Conversion Unit on 1 October 1974 and the Shackletons of No 8 Squadron transferred from RAF Kinloss on 25 August 1973. During 1978, ‘D’ Flight was re-equipped with Sea Kings in September, whilst in December No 48 Squadron of the Royal Air Force Regiment arrived to provide short range air defence with Rapier surface-to-air missiles. July 1979 saw the formation of No 2622 (Highland) Squadron Royal Auxiliary Air Force Regiment tasked with airfield ground defence duties. From 1978 to 1981, No 2 Tactical Weapons Unit flew Hunters from the base and in October 1984, the Buccaneers of No 237 Operational Conversion Unit arrived and were later joined by those of No 208 and No 12(Bomber) Squadrons. In 1991 the Buccaneer Wing flew a laser designation role during the Gulf War. On 1 July 1991 the Shackletons of No 8 Squadron retired from service and on 1 October 1991, the Buccaneer Operational Conversion Unit was disbanded. In 1992, No 237 Field Squadron of the Territorial Army was formed with responsibility for airfield support and damage repair. Also during that year RAF Lossiemouth formally received the Freedom of the District of Moray. In 1993 the Buccaneer began to be replaced by a maritime attack version of the Tornado, the GR1B. No 12(Bomber) Squadron re-equipped on 1 October 1993 and the Tornado Weapons Conversion Unit arrived on 1 November 1993 and was renamed No XV(Reserve) Squadron. In April 1994, No 208 Squadron was disbanded and replaced by No 617 Squadron whilst No 48 Squadron Royal Air Force Regiment disbanded on 1 July 1996. When the Tri-National Tornado Training Establishment closed, No XV(Reserve) Squadron became the Tornado GR1 Operational Conversion Unit on 18 May 1999. No 237 Field Squadron disbanded on 21 May 1999 and the Jaguar Operational Conversion Unit, No 16 (Reserve) Squadron, departed on 21 July 2000. No 14 Squadron arrived on 12 January 2001 from Germany and No 51 Squadron RAF Regiment, a very high readiness field squadron reformed on 8 May 2001. In 2003, the Tornado GR4 arrived on Station and the Tornado Wing, No 51 Squadron RAF Regiment and No 2622 (Highland) Squadron RAuxAF Regiment, supported by many other Station personnel, saw operational service in Iraq. On 1 July 2005, Headquarters No 5 Force Protection Wing arrived at RAF Lossiemouth. Then, on 1 April 2006 the RAF reintroduced the Expeditionary Air Wing concept and assigned RAF Lossiemouth the title of No 140 EAW. No 140 EAW has historical provenance, emanating from the 2nd Tactical Air Force from 1945, which famously operated the Mosquito in the fighter, bomber and interdiction roles. For over 75 years the men and women of RAF Lossiemouth have served with distinction, training aircrew for front line squadrons and delivering and supporting air power on (or during) operations in Iraq, Afghanistan and Libya. During this time, RAF Lossiemouth and HMS Fulmar have been home to many famous aircraft types, including the Wellington, Shackleton, Buccaneer, Jaguar, Sea King and Tornado.