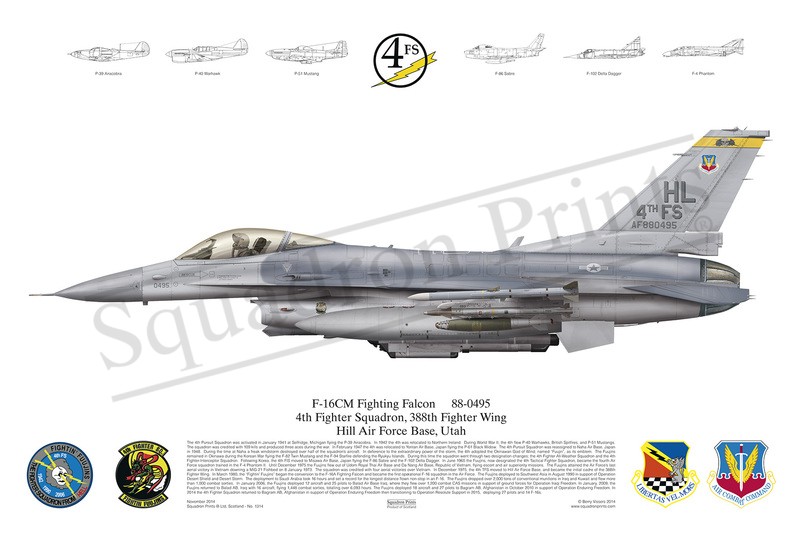 Squadron Prints Lithograph No. 1314 - F-16CM Fighting Falcon, 88-0495 \'4 FS\', 4th Fighter Squadron, 388th Fighter Wing, Hill AFB, Utah. The 4th Pursuit Squadron was activated in January 1941 at Selfridge, Michigan flying the P-39 Airacobra. In 1942 the 4th was relocated to Northern Ireland. During World War II, the 4th flew P-40 Warhawks, British Spitfires, and P-51 Mustangs. The squadron was credited with 109 kills and produced three aces during the war. In February 1947 the 4th was relocated to Yontan Air Base, Japan flying the P-61 Black Widow. The 4th Pursuit Squadron was reassigned to Naha Air Base, Japan in 1948. During the time at Naha a freak windstorm destroyed over half of the squadron’s aircraft. In deference to the extraordinary power of the storm, the 4th adopted the Okinawan God of Wind, named “Fuujin”, as its emblem. The Fuujins remained in Okinawa during the Korean War flying the F-82 Twin Mustang and the F-94 Starfire defending the Ryukyu Islands. During this time the squadron went through two designation changes; the 4th Fighter All-Weather Squadron and the 4th Fighter-Interceptor Squadron. Following Korea, the 4th FIS moved to Misawa Air Base, Japan flying the F-86 Sabre and the F-102 Delta Dagger. In June 1965 the Fuujins, now designated the 4th Tactical Fighter Squadron, became the fourth Air Force squadron trained in the F-4 Phantom II. Until December 1975 the Fuujins flew out of Udom Royal Thai Air Base and Da Nang Air Base, Republic of Vietnam, flying escort and air superiority missions. The Fuujins attained the Air Force’s last aerial victory in Vietnam downing a MiG-21 Fishbed on 8 January 1973. The squadron was credited with four aerial victories over Vietnam. In December 1975, the 4th TFS moved to Hill Air Force Base, and became the initial cadre of the 388th Fighter Wing. In March 1980, the “Fightin’ Fuujins” began the conversion to the F-16A Fighting Falcon and became the first operational F-16 squadron in the Air Force. The Fuujins deployed to Southwest Asia in August 1990 in support of Operation Desert Shield and Desert Storm. The deployment to Saudi Arabia took 16 hours and set a record for the longest distance flown non-stop in an F-16. The Fuujins dropped over 2,000 tons of conventional munitions in Iraq and Kuwait and flew more than 1,000 combat sorties. In January 2006, the Fuujins deployed 12 aircraft and 25 pilots to Balad Air Base Iraq, where they flew over 1,200 combat CAS missions in support of ground forces for Operation Iraqi Freedom. In January, 2009, the Fuujins returned to Balad AB, Iraq with 16 aircraft, flying 1,448 combat sorties, totalling over 6,093 hours. The Fuujins deployed 18 aircraft and 27 pilots to Bagram AB, Afghanistan in October 2010 in support of Operation Enduring Freedom. In 2014 the 4th Fighter Squadron returned to Bagram AB, Afghanistan in support of Operation Enduring Freedom then transitioning to Operation Resolute Support in 2015, deploying 27 pilots and 14 F-16s.