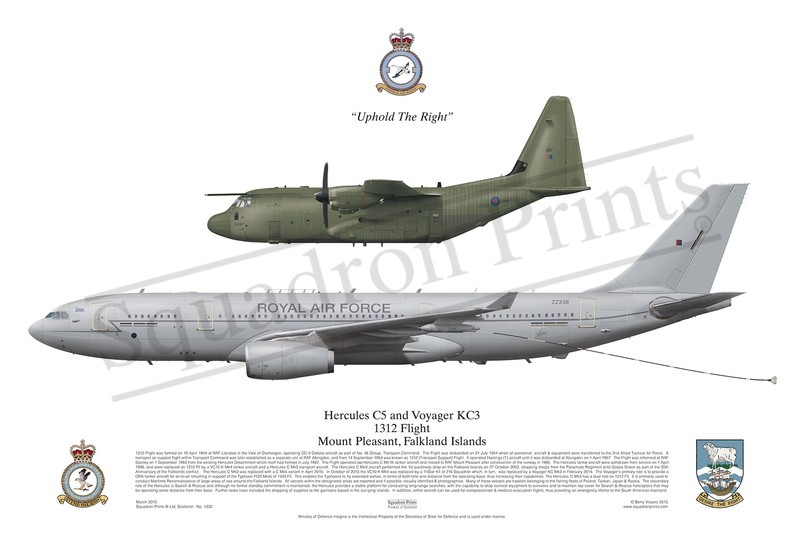 Squadron Prints Lithograph No. 1332 - ZH887, Hercules C3, ZZ338, Voyager KC3, 1312 Flight, Mount Pleasant Airfield, Falkland Islands. 1312 Flight was formed on 19 April 1944 at RAF Llandow in the Vale of Glamorgan, operating DC-3 Dakota aircraft as part of No. 46 Group, Transport Command. The Flight was disbanded on 21 July 1944 when all personnel, aircraft & equipment were transferred to the 2nd Allied Tactical Air Force. A transport air support flight within Transport Command was later established as a separate unit at RAF Abingdon, and from 14 September 1954 was known as 1312 (Transport Support) Flight. It operated Hastings (T) aircraft until it was disbanded at Abingdon on 1 April 1957. The Flight was reformed at RAF Stanley on 1 September 1983 from the existing Hercules Detachment which itself had formed in July 1982. The Flight operated two Hercules C Mk1K tanker aircraft and moved to RAF Mount Pleasant after construction of the runway in 1986. The Hercules tanker aircraft were withdrawn from service on 1 April 1996, and were replaced on 1312 Flt by a VC10 K Mk4 tanker aircraft and a Hercules C Mk3 transport aircraft. The Hercules C Mk3 aircraft performed the 1st paratroop drop on the Falkland Islands on 27 October 2002, dropping troops from the Parachute Regiment onto Goose Green as part of the 20th Anniversary of the Falklands conflict. The Hercules C Mk3 was replaced with a C Mk5 variant in April 2010. In October of 2013 the VC10 K Mk4 was replaced by a TriStar K1 of 216 Squadron which, in turn, was replaced by a Voyager KC Mk3 in February 2014. The Voyager’s primary role is to provide a QRA tanker aircraft for air-to-air refuelling in support of the Typhoon FGR Mk4s of 1435 Flt. This enables the Typhoons to fly extended sorties, in terms of both time and distance from the operating base, thus increasing their capabilities. The Hercules C Mk5 has a dual role on 1312 Flt. It is primarily used to conduct Maritime Reconnaissance of large areas of sea around the Falkland Islands. All vessels within the designated areas are reported and if possible, visually identified & photographed. Many of these vessels are trawlers belonging to the fishing fleets of Poland, Taiwan, Japan & Russia. The secondary role of the Hercules is Search & Rescue and although no formal standby commitment is maintained, the Hercules provides a stable platform for conducting long-range searches, with the capability to drop survival equipment to survivors and to maintain top cover for Search & Rescue helicopters that may be operating some distance from their base. Further tasks have included the dropping of supplies to the garrisons based in the out-lying islands. In addition, either aircraft can be used for compassionate & medical evacuation flights, thus providing an emergency lifeline to the South American mainland.