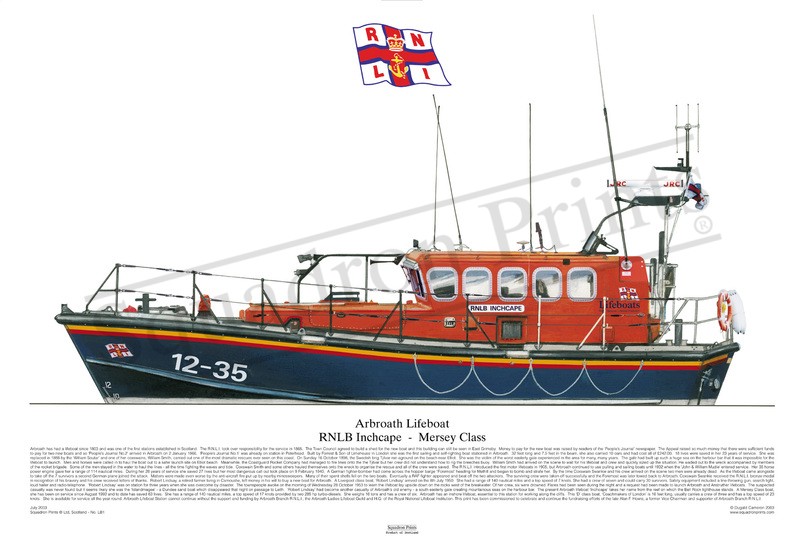 Squadron Prints Lithograph No. LB001 - Arbroath Lifeboat, RNLB Inchcape, Mersey Class. Arbroath has had a lifeboat since 1803 and was one of the first stations established in Scotland. The R.N.L.I. took over responsibility for the service in 1865. The Town Council agreed to build a shed for the new boat and this building can still be seen in East Grimsby. Money to pay for the new boat was raised by readers of the ‘People’s Journal’ newspaper. The Appeal raised so much money that there were sufficient funds to pay for two new boats and so ‘People’s Journal No.2’ arrived in Arbroath on 2 January 1866. ‘People’s Journal No.1’ was already on station in Peterhead. Built by Forrest & Son of Limehouse in London she was the first sailing and self-righting boat stationed in Arbroath. 32 feet long and 7.5 feet in the beam, she also carried 10 oars and had cost all of £242.00. 18 lives were saved in her 23 years of service. She was replaced in 1888 by the ‘William Soutar’ and one of her coxswains, William Smith, carried out one of the most dramatic rescues ever seen on this coast. On Sunday 16 October 1898, the Swedish brig Tjilvar ran aground on the beach near Elliot. She was the victim of the worst easterly gale experienced in the area for many, many years. The gale had built up such a huge sea on the harbour bar that it was impossible for the lifeboat to launch. Men and horses were called in to haul the boat out to a safer launch site on Elliot beach. Meanwhile, the Coastguard Rocket Company had managed to fire lines onto the the Tjilvar but her crew did not understand how to rig the breeches buoy. William Smith had arrived on the scene to wait for his lifeboat and crew and quickly sized up the situation. He waded out to the wreck accompanied by members of the rocket brigade. Some of the men stayed in the water to haul the lines - all the time fighting the waves and tide. Coxswain Smith and some others hauled themselves onto the wreck to organise the rescue and all of the crew were saved. The R.N.L.I. introduced the first motor lifeboats in 1905, but Arbroath continued to use pulling and sailing boats until 1932 when the ‘John & William Mudie’ entered service. Her 35 horse power engine gave her a range of 114 nautical miles. During her 28 years of service she saved 27 lives but her most dangerous call out took place on 9 February 1940. A German fighter-bomber had come across the hopper barge “Foremost’ heading for Methill and began to bomb and strafe her. By the time Coxswain Swankie and his crew arrived on the scene two men were already dead. As the lifeboat came alongside to take off the 7 survivors a second German plane joined the attack. Matters were made even worse by the anti-aircraft fire put up by nearby minesweepers. Many of their spent shells fell on the two boats. Eventually a RAF fighter appeared and beat off the two attackers. The surviving crew were taken off successfully and the Foremost was later towed back to Arbroath. Coxswain Swankie received the R.N.L.I. bronze medal in recognition of his bravery and his crew received letters of thanks. Robert Lindsay, a retired farmer living in Carnoustie, left money in his will to buy a new boat for Arbroath. A Liverpool class boat, ‘Robert Lindsay’ arrived on the 8th July 1950. She had a range of 140 nautical miles and a top speed of 7 knots. She had a crew of seven and could carry 30 survivors. Safety equipment included a line-throwing gun, search light, loud hailer and radio-telephone. ‘Robert Lindsay’ was on station for three years when she was overcome by disaster. The townspeople awoke on the morning of Wednesday 28 October 1953 to learn the lifeboat lay upside down on the rocks west of the breakwater. Of her crew, six were drowned. Flares had been seen during the night and a request had been made to launch Arbroath and Anstruther lifeboats. The suspected casualty was never found but it seems likely she was the ‘Islandmagee’ - a Dundee sand boat which disappeared that night on passage to Leith. ‘Robert Lindsay’ had become another casualty of Arbroath’s old enemy - a south easterly gale creating mountainous seas on the harbour bar. The present Arbroath lifeboat ‘Inchcape’ takes her name from the reef on which the Bell Rock lighthouse stands. A Mersey Class boat, she has been on service since August 1993 and to date has saved 63 lives. She has a range of 140 nautical miles, a top speed of 17 knots provided by two 285 hp turbo-diesels. She weighs 16 tons and has a crew of six. Arbroath has an inshore lifeboat, essential to this station for working along the cliffs. This ‘D’ class boat, ‘Coachmakers of London’ is 16 feet long, usually carries a crew of three and has a top speed of 23 knots. She is available for service all the year round. Arbroath Lifeboat Station cannot continue without the support and funding by Arbroath Branch R.N.L.I., the Arbroath Ladies Lifeboat Guild and H.Q. of the Royal National Lifeboat Institution. This print has been commissioned to celebrate and continue the fundraising efforts of the late Alan F. Howie, a former Vice Chairman and supporter of Arbroath Branch R.N.L.I.