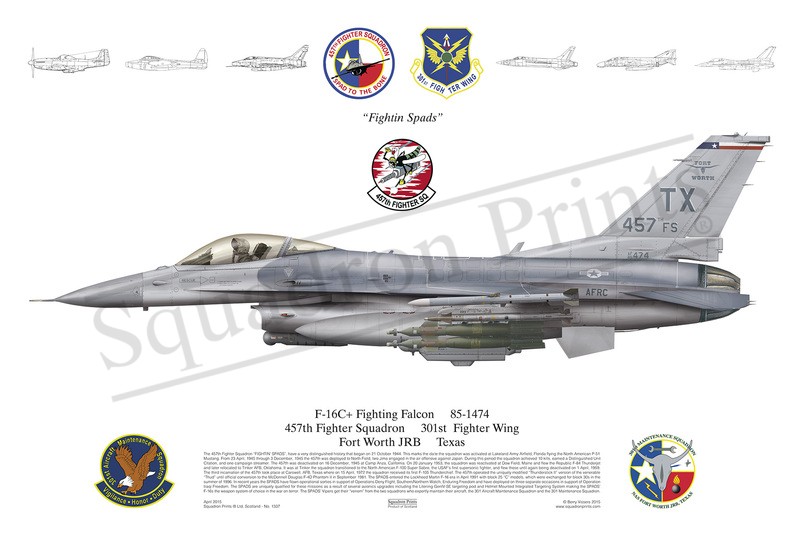 Squadron Prints Lithograph No. 1337 - 85-1474, F-16C Fighting Falcon, 457th Fighter Squadron, 301st Fighter Wing, Fort Worth JRB, Texas. The 457th Fighter Squadron “FIGHTIN’ SPADS”, have a very distinguished history that began on 21 October 1944. This marks the date the squadron was activated at Lakeland Army Airfield, Florida flying the North American P-51 Mustang. From 23 April, 1945 through 3 December, 1945 the 457th was deployed to North Field, Iwo Jima engaged in the air offensive against Japan. During this period the squadron achieved 10 kills, earned a Distinguished Unit Citation, and one campaign streamer. The 457th was deactivated on 16 December, 1945 at Camp Anza, California. On 20 January 1953, the squadron was reactivated at Dow Field, Maine and flew the Republic F-84 Thunderjet and later relocated to Tinker AFB, Oklahoma. It was at Tinker the squadron transitioned to the North American F-100 Super Sabre, the USAF’s first supersonic fighter, and flew these until again being deactivated on 1 April, 1959. The third incarnation of the 457th took place at Carswell, AFB, Texas where on 15 April, 1972 the squadron received its first F-105 Thunderchief. The 457th operated the uniquely modified “Thunderstick II” version of the venerable “Thud” until official conversion to the McDonnell Douglas F-4D Phantom II in September 1981. The SPADS entered the Lockheed Martin F-16 era in April 1991 with block 25 “C” models, which were exchanged for block 30s in the summer of 1996. In recent years the SPADS have flown operational sorties in support of Operations Deny Flight, Southern/Northern Watch, Enduring Freedom and have deployed on three separate occasions in support of Operation Iraqi Freedom. The SPADS are uniquely qualified for these missions as a result of several avionics upgrades including the Litening GenIV-SE targeting pod and Helmet Mounted Integrated Targeting System making the SPADS’ F-16s the weapon system of choice in the war on terror. The SPADS’ Vipers get their “venom” from the two squadrons who expertly maintain their aircraft, the 301 Aircraft Maintenance Squadron and the 301 Maintenance Squadron.