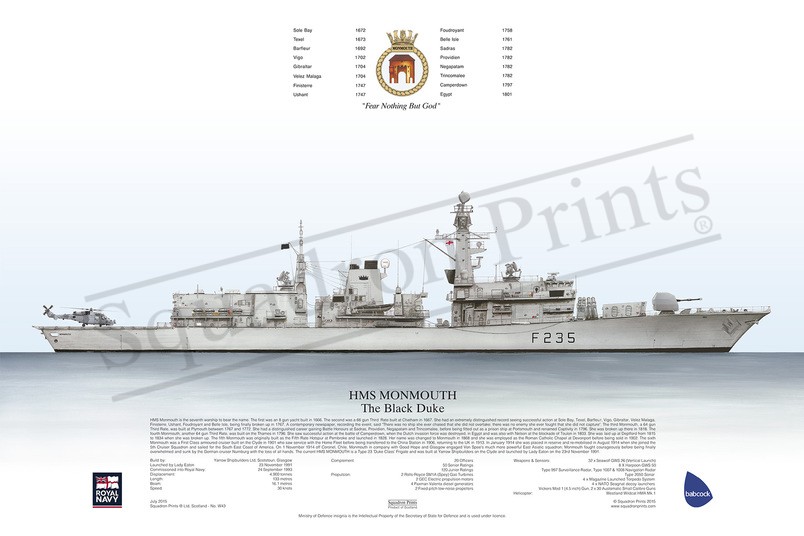 Squadron Prints Lithograph No. W43 - HMS Monmouth, The Black Duke. HMS Monmouth is the seventh warship to bear the name. The first was an 8 gun yacht built in 1666. The second was a 66 gun Third Rate built at Chatham in 1667. She had an extremely distinguished record seeing successful action at Sole Bay, Texel, Barfleur, Vigo, Gibraltar, Velez Malaga, Finisterre, Ushant, Foudroyant and Belle Isle, being finally broken up in 1767. A contemporary newspaper, recording the event, said "There was no ship she ever chased that she did not overtake: there was no enemy she ever fought that she did not capture". The third Monmouth, a 64 gun Third Rate, was built at Plymouth between 1767 and 1772. She had a distinguished career gaining Battle Honours at Sadras, Providien, Negapatam and Trincomalee, before being fitted out as a prison ship at Portsmouth and renamed Captivity in 1796. She was broken up there in 1818. The fourth Monmouth, another 64 gun Third Rate, was built on the Thames in 1796. She saw successful action at the battle of Camperdown, when the Dutch invasion force was destroyed, in Egypt and was also with Nelson at the blockade of Toulon in 1803. She was laid up at Deptford from 1815 to 1834 when she was broken up. The fifth Monmouth was originally built as the Fifth Rate Hotspur at Pembroke and launched in 1828. Her name was changed to Monmouth in 1868 and she was employed as the Roman Catholic Chapel at Devonport before being sold in 1902. The sixth Monmouth was a First Class armoured cruiser built on the Clyde in 1901 who saw service with the Home Fleet before being transferred to the China Station in 1906, returning to the UK in 1913. In January 1914 she was placed in reserve and re-mobilised in August 1914 when she joined the 5th Cruiser Squadron and sailed for the South East Coast of America. On 1 November 1914 off Coronel, Chile, Monmouth in company with Good Hope and Glasgow engaged Von Spee's much more powerful East Asiatic squadron; Monmouth fought courageously before being finally overwhelmed and sunk by the German cruiser Nurnburg with the loss of all hands. The current HMS MONMOUTH is a Type 23 'Duke Class' Frigate and was built at Yarrow Shipbuilders on the Clyde and launched by Lady Eaton on the 23rd November 1991.