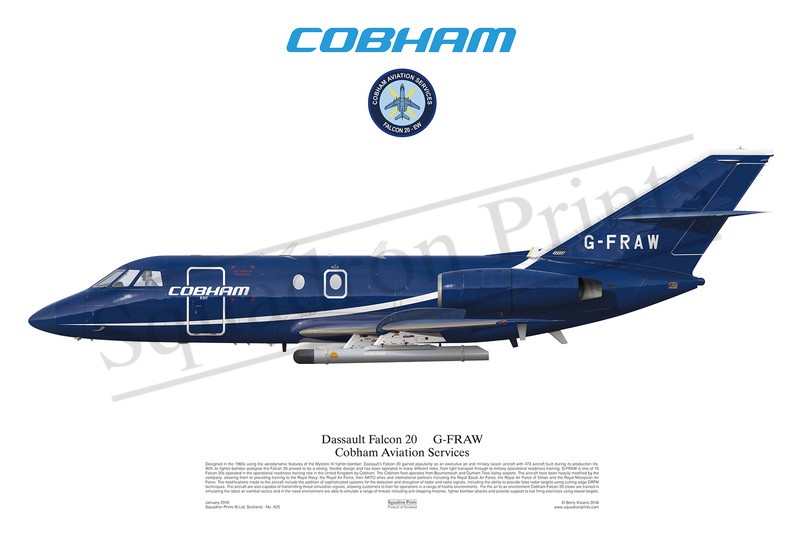 Squadron Prints Lithograph No. A25 - Dassault Falcon 20, G-FRAW, Cobham Aviation Services. Designed in the 1960s using the aerodynamic features of the Mystere IV fighter-bomber, Dassault’s Falcon 20 gained popularity as an executive jet and military liaison aircraft with 473 aircraft built during its production life. With its fighter-bomber pedigree the Falcon 20 proved to be a strong, flexible design and has been operated in many different roles, from light transport through to military operational readiness training. G-FRAW is one of 15 Falcon 20s operated in the operational readiness training role in the United Kingdom by Cobham. The Cobham fleet operates from Bournemouth and Durham Tees Valley airports. The aircraft have been heavily modified by the company, allowing them to providing training to the Royal Navy, the Royal Air Force, their NATO allies and international partners including the Royal Saudi Air Force, the Royal Air Force of Oman and the Royal Malaysian Air Force. The modifications made to the aircraft include the addition of sophisticated systems for the detection and disruption of radar and radio signals, including the ability to provide false radar targets using cutting edge DRFM techniques. The aircraft are also capable of transmitting threat simulation signals, allowing customers to train for operations in a range of hostile environments. For the air to air environment Cobham Falcon 20 crews are trained in simulating the latest air combat tactics and in the naval environment are able to simulate a range of threats including anti-shipping missiles, fighter bomber attacks and provide support to live firing exercises using towed targets.