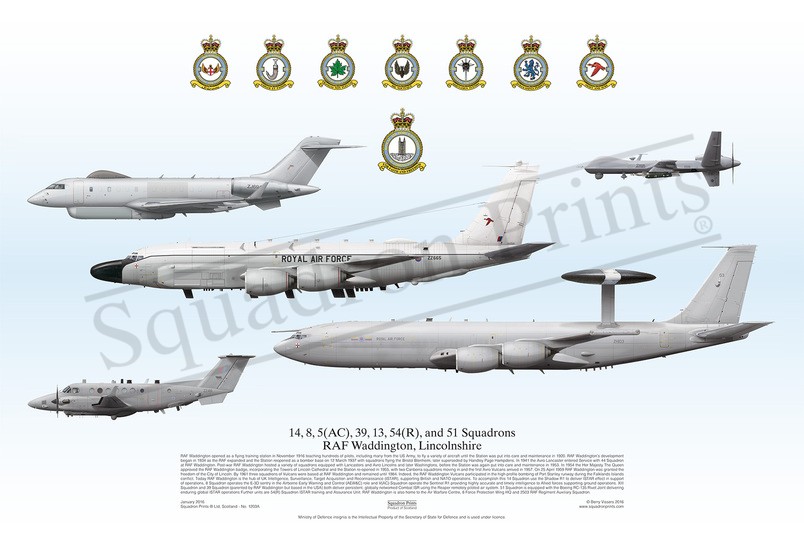 Squadron Prints Lithograph No. 1203A - 14, 8, 5(AC), 39, 13, 54(R) and 51 Squadron, RAF Waddington, Lincolnshire. RAF Waddington opened as a flying training station in November 1916 teaching hundreds of pilots, including many from the US Army, to fly a variety of aircraft until the Station was put into care and maintenance in 1920. RAF Waddington’s development began in 1934 as the RAF expanded and the Station reopened as a bomber base on 12 March 1937 with squadrons flying the Bristol Blenheim, later superseded by Handley Page Hampdens. In 1941 the Avro Lancaster entered Service with 44 Squadron at RAF Waddington. Post-war RAF Waddington hosted a variety of squadrons equipped with Lancasters and Avro Lincolns and later Washingtons, before the Station was again put into care and maintenance in 1953. In 1954 the Her Majesty The Queen approved the RAF Waddington badge, incorporating the Towers of Lincoln Cathedral and the Station re-opened in 1955, with two Canberra squadrons moving in and the first Avro Vulcans arrived in 1957. On 25 April 1959 RAF Waddington was granted the freedom of the City of Lincoln. By 1961 three squadrons of Vulcans were based at RAF Waddington and remained until 1984. Indeed, the RAF Waddington Vulcans participated in the high profile bombing of Port Stanley runway during the Falklands Islands conflict. Today RAF Waddington is the hub of UK Intelligence, Surveillance, Target Acquisition and Reconnaissance (ISTAR), supporting British and NATO operations. To accomplish this 14 Squadron use the Shadow R1 to deliver ISTAR effect in support of operations, 8 Squadron operates the E-3D sentry in the Airborne Early Warning and Control (AEW&C) role and V(AC) Squadron operate the Sentinel R1 providing highly accurate and timely intelligence to Allied forces supporting ground operations. XIII Squadron and 39 Squadron (parented by RAF Waddington but based in the USA) both deliver persistent, globally networked Combat ISR using the Reaper remotely piloted air system. 51 Squadron is equipped with the Boeing RC-135 Rivet Joint delivering enduring global ISTAR operations Further units are 54(R) Squadron ISTAR training and Assurance Unit. RAF Waddington is also home to the Air Warfare Centre, 8 Force Protection Wing HQ and 2503 RAF Regiment Auxiliary Squadron.