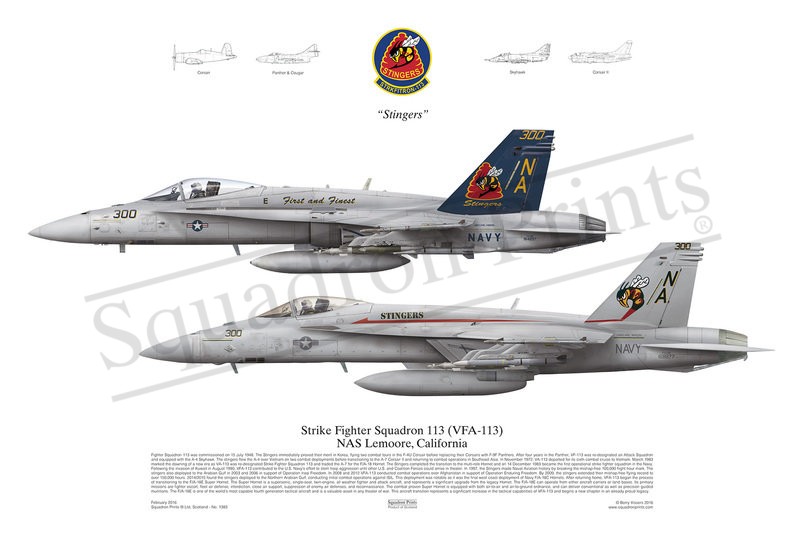 Squadron Prints Lithograph No. 1383 - 164257 '300, 168877 '300', F/A-18C Hornet, F/A-18E Super Hornet, Strike Fighter Squadron 113 (VFA-113), NAS Lemoore, California. Fighter Squadron 113 was commissioned on 15 July 1948. The Stingers immediately proved their merit in Korea, flying two combat tours in the F-4U Corsair before replacing their Corsairs with F-9F Panthers. After four years in the Panther, VF-113 was re-designated an Attack Squadron and equipped with the A-4 Skyhawk. The stingers flew the A-4 over Vietnam on two combat deployments before transitioning to the A-7 Corsair II and returning to combat operations in Southeast Asia. In November 1972, VA-113 departed for its sixth combat cruise to Vietnam. March 1983 marked the dawning of a new era as VA-113 was re-designated Strike Fighter Squadron 113 and traded the A-7 for the F/A-18 Hornet. The Stingers completed the transition to the multi-role Hornet and on 14 December 1983 became the first operational strike fighter squadron in the Navy. Following the invasion of Kuwait in August 1990, VFA-113 contributed to the U.S. Navyâ€™s effort to stem Iraqi aggression until other U.S. and Coalition Forces could arrive in theater. In 1997, the Stingers made Naval Aviation history by breaking the mishap-free 100,000 flight hour mark. The stingers also deployed to the Arabian Gulf in 2003 and 2006 in support of Operation Iraqi Freedom. In 2008 and 2012 VFA-113 conducted combat operations over Afghanistan in support of Operation Enduring Freedom. By 2009, the stingers extended their mishap-free flying record to over 150,000 hours. 2014/2015 found the stingers deployed to the Northern Arabian Gulf, conducting initial combat operations against ISIL. This deployment was notable as it was the final west coast deployment of Navy F/A-18C Hornets. After returning home, VFA-113 began the process of transitioning to the F/A-18E Super Hornet. The Super Hornet is a supersonic, single-seat, twin-engine, all weather fighter and attack aircraft, and represents a significant upgrade from the legacy Hornet. The F/A-18E can operate from either aircraft carriers or land bases. Its primary missions are fighter escort, fleet air defense, interdiction, close air support, suppression of enemy air defenses, and reconnaissance. The combat proven Super Hornet is equipped with both air-to-air and air-to-ground ordnance, and can deliver conventional as well as precision guided munitions. The F/A-18E is one of the worldâ€™s most capable fourth generation tactical aircraft and is a valuable asset in any theater of war. This aircraft transition represents a significant increase in the tactical capabilities of VFA-113 and begins a new chapter in an already proud legacy.