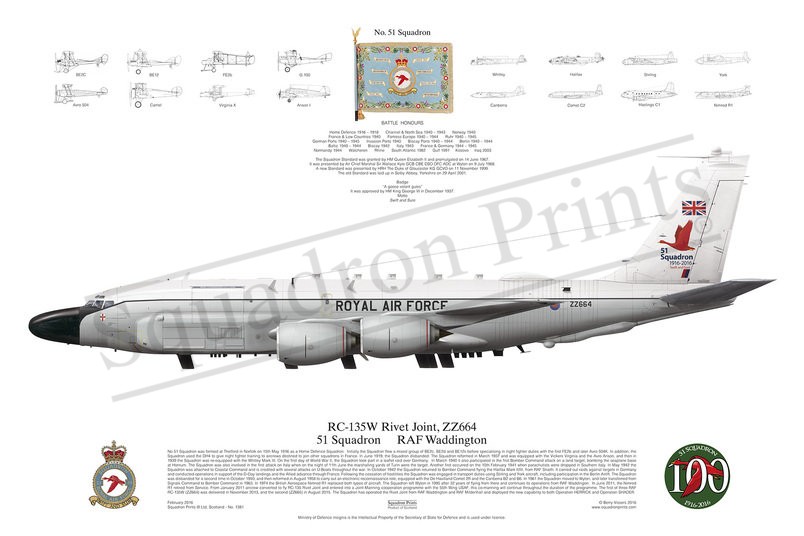 Squadron Prints Lithograph No. 1381 - ZZ664, RC-135W Rivet Joint, 51 Squadron, RAF Waddington. No 51 Squadron was formed at Thetford in Norfolk on 15th May 1916 as a Home Defence Squadron. Initially the Squadron flew a mixed group of BE2c, BE2d and BE12s before specialising in night fighter duties with the first FE2b and later Avro 504K. In addition, the Squadron used the DH4 to give night fighter training to aircrews destined to join other squadrons in France. In June 1919, the Squadron disbanded. The Squadron reformed in March 1937 and was equipped with the Vickers Virginia and the Avro Anson, and then in 1939 the Squadron was re-equipped with the Whitley Mark III. On the first day of World War II, the Squadron took part in a leaflet raid over Germany. In March 1940 it also participated in the first Bomber Command attack on a land target, bombing the seaplane base at Hornum. The Squadron was also involved in the first attack on Italy when on the night of 11th June the marshalling yards of Turin were the target. Another first occurred on the 10th February 1941 when parachutists were dropped in Southern Italy. In May 1942 the Squadron was attached to Coastal Command and is credited with several attacks on U-Boats throughout the war. In October 1942 the Squadron returned to Bomber Command flying the Halifax Mark II/III, from RAF Snaith. It carried out raids against targets in Germany and conducted operations in support of the D-Day landings and the Allied advance through France. Following the cessation of hostilities the Squadron was engaged in transport duties using Stirling and York aircraft, including participation in the Berlin Airlift. The Squadron was disbanded for a second time in October 1950, and then reformed in August 1958 to carry out an electronic reconnaissance role, equipped with the De Havilland Comet 2R and the Canberra B2 and B6. In 1961 the Squadron moved to Wyton, and later transferred from Signals Command to Bomber Command in 1963. In 1974 the British Aerospace Nimrod R1 replaced both types of aircraft. The Squadron left Wyton in 1995 after 32 years of flying from there and continues its operations from RAF Waddingon. In June 2011, the Nimrod R1 retired from Service. From January 2011 aircrew converted to fly RC-135 Rivet Joint and entered into a Joint Manning cooperation programme with the 55th Wing USAF; this co-manning will continue throughout the duration of the programme. The first of three RAF RC-135W (ZZ664) was delivered in November 2013, and the second (ZZ665) in August 2015. The Squadron has operated the Rivet Joint from RAF Waddington and RAF Mildenhall and deployed the new capability to both Operation HERRICK and Operation SHADER.