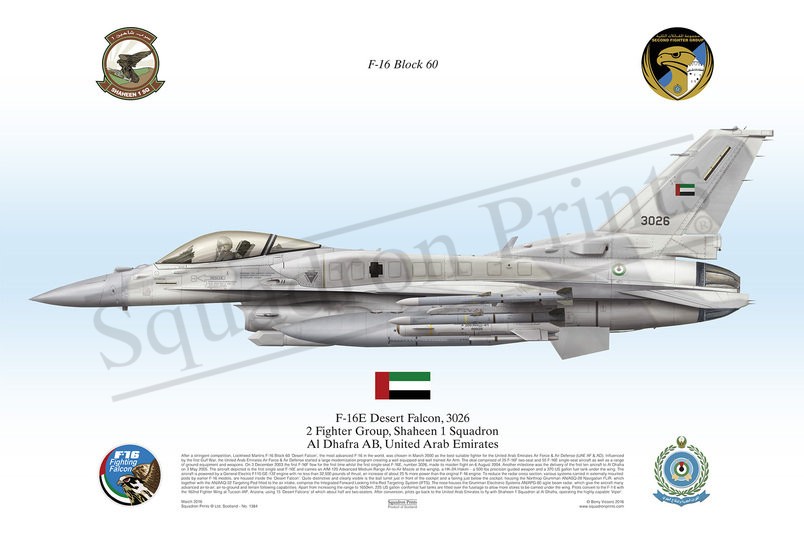 Squadron Prints Lithograph No. 1384 - 3026, F-16E Desert Falcon, 2 Fighter Group, Shaheen 1 Squadron, Al Dhafra AB, United Arab Emirates. After a stringent competition, Lockheed Martins F-16 Block 60 â€˜Desert Falconâ€™, the most advanced F-16 in the world, was chosen in March 2000 as the best suitable fighter for the United Arab Emirates Air Force & Air Defense (UAE AF & AD). Influenced by the first Gulf War, the United Arab Emirates Air Force & Air Defense started a large modernisation program creating a well equipped and well trained Air Arm. The deal comprised of 25 F-16F two-seat and 55 F-16E single-seat aircraft as well as a range of ground equipment and weapons. On 3 December 2003 the first F-16F flew for the first time whilst the first single-seat F-16E, number 3026, made its maiden flight on 6 August 2004. Another milestone was the delivery of the first ten aircraft to Al Dhafra on 3 May 2005. The aircraft depicted is the first single seat F-16E and carries an AIM-120 Advanced Medium Range Air-to-Air Missile at the wingtip, a HK-2A Hakim â€“ a 500 lbs precision guided weapon and a 370 US gallon fuel tank under the wing. The aircraft is powered by a General Electric F110-GE-132 engine with no less than 32,500 pounds of thrust, an increase of about 25% more power than the original F-16 engine. To reduce the radar cross section, various systems carried in externally mounted pods by earlier F-16 models, are housed inside the â€˜Desert Falconâ€™. Quite distinctive and clearly visible is the ball turret just in front of the cockpit and a fairing just below the cockpit, housing the Northrop Grumman AN/ASQ-28 Navigation FLIR, which together with the AN/AAQ-32 Targeting Pod fitted to the air intake, comprise the Integrated Forward Looking Infra-Red Targeting System (IFTS). The nose houses the Grumman Electronic Systems AN/APG-80 agile beam radar, which give the aircraft many advanced air-to-air, air-to-ground and terrain following capabilities. Apart from increasing the range to 1650km, 225 US gallon conformal fuel tanks are fitted over the fuselage to allow more stores to be carried under the wing. Pilots convert to the F-16 with the 162nd Fighter Wing at Tucson IAP, Arizona, using 15 â€˜Desert Falconsâ€™ of which about half are two-seaters. After conversion, pilots go back to the United Arab Emirates to fly with Shaheen 1 Squadron at Al Dhafra, operating the highly capable â€˜Viperâ€™.