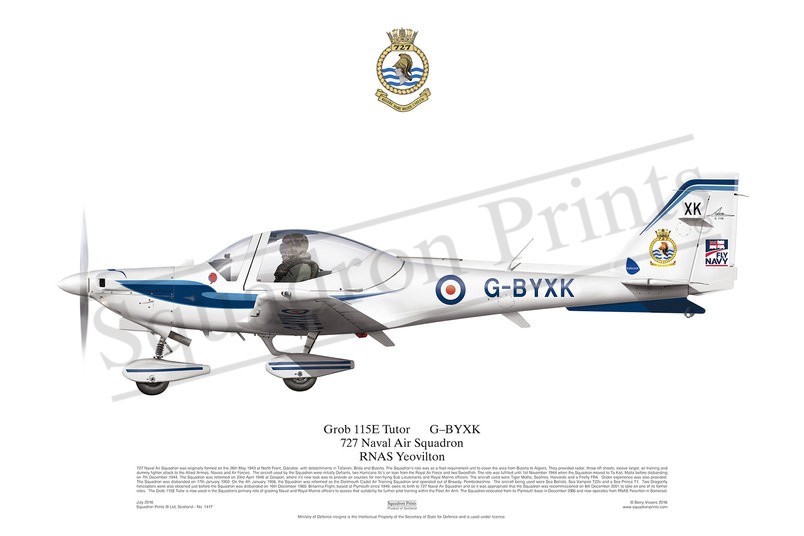 Squadron Prints Lithograph No. 1417 - G-BYXK, Grob 115E Tutor, 727 Naval Air Squadron, RNAS Yeovilton. 727 Naval Air Squadron was originally formed on the 26th May 1943 at North Front, Gibraltar, with detatchments in Tafaroni, Blida and Bizerta. The Squadronâ€™s role was as a fleet requirement unit to cover the area from Bizerta to Algiers. They provided radar, throw off shoots, sleeve target, air training and dummy fighter attack to the Allied Armies, Navies and Air Forces. The aircraft used by the Squadron were initially Defiants, two Hurricane IIcâ€™s on loan from the Royal Air Force and two Swordfish. The role was fulfilled until 1st November 1944 when the Squadron moved to Ta Kali, Malta before disbanding on 7th December 1944. The Squadron was reformed on 23rd April 1946 at Gosport, where itâ€™s new task was to provide air courses for non-flying Sub Lieutenants and Royal Marine officers. The aircraft used were Tiger Moths, Seafires, Harvards and a Firefly FR4. Glider experience was also provided. The Squadron was disbanded on 17th January 1950. On the 4th January 1956, the Squadron was reformed as the Dartmouth Cadet Air Training Squadron and operated out of Brawdy, Pembrokeshire. The aircraft being used were Sea Balliols, Sea Vampire T22s and a Sea Prince T1. Two Dragonfly helicopters were also obtained just before the Squadron was disbanded on 16th December 1960. Britannia Flight, based at Plymouth since 1949, owes its birth to 727 Naval Air Squadron and so it was appropriate that the Squadron was recommissioned on 6th December 2001 to take on one of its former roles. The Grob 115E Tutor is now used in the Squadrons primary role of grading Naval and Royal Marine officers to assess their suitability for further pilot training within the Fleet Air Arm. The Squadron relocated from its Plymouth base in December 2006 and now operates from RNAS Yeovilton in Somerset.