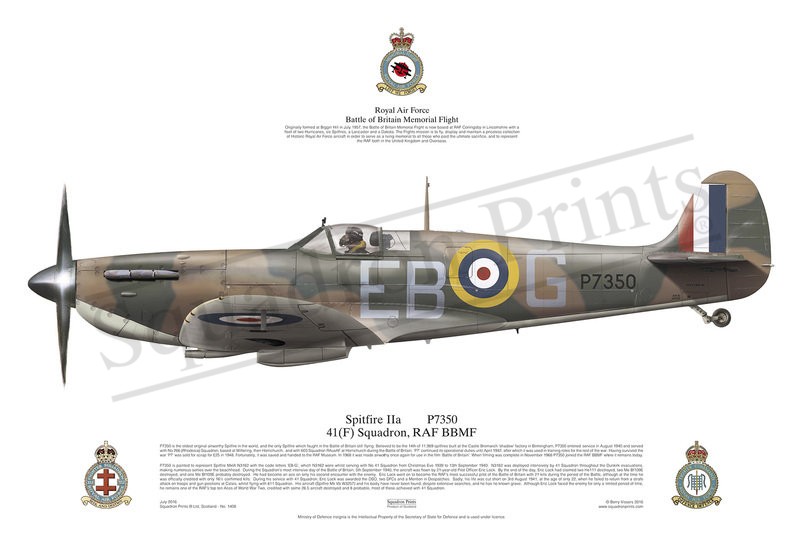 Squadron Prints Lithograph No. 1408 - P7350 'EB-G', Spitfire IIa, 41(F) Squadron, RAF BBMF. P7350 is the oldest original airworthy Spitfire in the world, and the only Spitfire which fought in the Battle of Britain still flying. Believed to be the 14th of 11,989 spitfires built at the Castle Bromwich â€˜shadowâ€™ factory in Birmingham, P7350 entered service in August 1940 and served with No 266 (Rhodesia) Squadron, based at Wittering, then Hornchurch, and with 603 Squadron RAuxAF at Hornchurch during the Battle of Britain. â€˜P7â€™ continued its operational duties until April 1942, after which it was used in training roles for the rest of the war. Having survived the war â€˜P7â€™ was sold for scrap for Â£25 in 1948. Fortunately, it was saved and handed to the RAF Museum. In 1968 it was made airworthy once again for use in the film â€˜Battle of Britainâ€™. When filming was complete in November 1968 P7350 joined the RAF BBMF where it remains today. P7350 is painted to represent Spitfire MkIA N3162 with the code letters â€˜EB-Gâ€™, which N3162 wore whilst serving with No 41 Squadron from Christmas Eve 1939 to 13th September 1940. N3162 was deployed intensively by 41 Squadron throughout the Dunkirk evacuations, making numerous sorties over the beachhead. During the Squadronâ€™s most intensive day of the Battle of Britain, 5th September 1940, the aircraft was flown by 21-year-old Pilot Officer Eric Lock. By the end of the day, Eric Lock had claimed two He111 destroyed, two Me Bf109E destroyed, and one Me Bf109E probably destroyed. He had become an ace on only his second encounter with the enemy. Eric Lock went on to become the RAFâ€™s most successful pilot of the Battle of Britain with 21 kills during the period of the Battle, although at the time he was officially credited with only 16Â½ confirmed kills. During his service with 41 Squadron, Eric Lock was awarded the DSO, two DFCs and a Mention in Despatches. Sadly, his life was cut short on 3rd August 1941, at the age of only 22, when he failed to return from a strafe attack on troops and gun positions at Calais, whilst flying with 611 Squadron. His aircraft (Spitfire Mk Vb W3257) and his body have never been found, despite extensive searches, and he has no known grave. Although Eric Lock faced the enemy for only a limited period of time, he remains one of the RAFâ€™s top ten Aces of World War Two, credited with some 26.5 aircraft destroyed and 8 probable, most of these achieved with 41 Squadron.