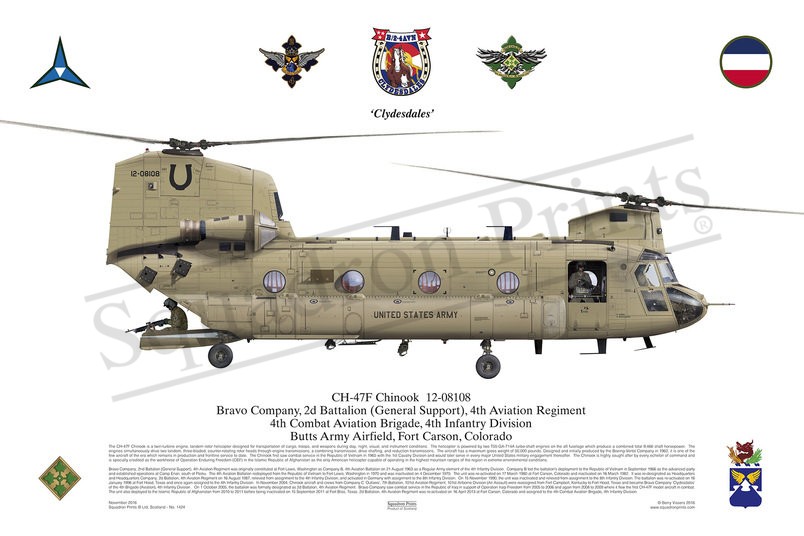 Squadron Prints Lithograph No. 1424 - 12-08108, CH-47F Chinook, Bravo Company, 2d Battalion (General Support), 4th Aviation Regiment, 4th Combat Aviation Brigade, 4th Infantry Division, Butts Army Airfield, Fort Carson, Colorado. The CH-47F Chinook is a twin-turbine engine, tandem rotor helicopter designed for transportation of cargo, troops, and weapons during day, night, visual, and instrument conditions. The helicopter is powered by two T55-GA-714A turbo-shaft engines on the aft fuselage which produce a combined total 9,466 shaft horsepower. The engines simultaneously drive two tandem, three-bladed, counter-rotating rotor heads through engine transmissions, a combining transmission, drive shafting, and reduction transmissions. The aircraft has a maximum gross weight of 50,000 pounds. Designed and initially produced by the Boeing-Vertol Company in 1962, it is one of the few aircraft of the era which remains in production and frontline service to date. The Chinook first saw combat service in the Republic of Vietnam in 1965 with the 1st Cavalry Division and would later serve in every major United States military engagement thereafter. The Chinook is highly sought after by every echelon of command and is specially credited as the workhorse of Operation Enduring Freedom (OEF) in the Islamic Republic of Afghanistan as the only American helicopter capable of operating in the highest mountain ranges of the region in extreme environmental conditions. Bravo Company, 2nd Battalion (General Support), 4th Aviation Regiment was originally constituted at Fort Lewis, Washington as Company B, 4th Aviation Battalion on 21 August 1963 as a Regular Army element of the 4th Infantry Division. Company B led the battalionâ€™s deployment to the Republic of Vietnam in September 1966 as the advanced party and established operations at Camp Enari, south of Pleiku. The 4th Aviation Battalion redeployed from the Republic of Vietnam to Fort Lewis, Washington in 1970 and was inactivated on 4 December 1970. The unit was re-activated on 17 March 1980 at Fort Carson, Colorado and inactivated on 16 March 1982. It was re-designated as Headquarters and Headquarters Company, 2d Battalion, 4th Aviation Regiment on 16 August 1987, relieved from assignment to the 4th Infantry Division, and activated in Germany with assignment to the 8th Infantry Division. On 15 November 1990, the unit was inactivated and relieved from assignment to the 8th Infantry Division. The battalion was re-activated on 16 January 1996 at Fort Hood, Texas and once again assigned to the 4th Infantry Division. In November 2004, Chinook aircraft and crews from Company C 'Outlaws', 7th Battalion, 101st Aviation Regiment, 101st Airborne Division (Air Assault) were reassigned from Fort Campbell, Kentucky to Fort Hood, Texas and became Bravo Company 'Clydesdales' of the 4th Brigade (Aviation), 4th Infantry Division . On 1 October 2005, the battalion was formally designated as 2d Battalion, 4th Aviation Regiment. Bravo Company saw combat service in the Republic of Iraq in support of Operation Iraqi Freedom from 2005 to 2006 and again from 2008 to 2009 where it flew the first CH-47F model aircraft in combat. The unit also deployed to the Islamic Republic of Afghanistan from 2010 to 2011 before being inactivated on 15 September 2011 at Fort Bliss, Texas. 2d Battalion, 4th Aviation Regiment was re-activated on 16 April 2013 at Fort Carson, Colorado and assigned to the 4th Combat Aviation Brigade, 4th Infantry Division.