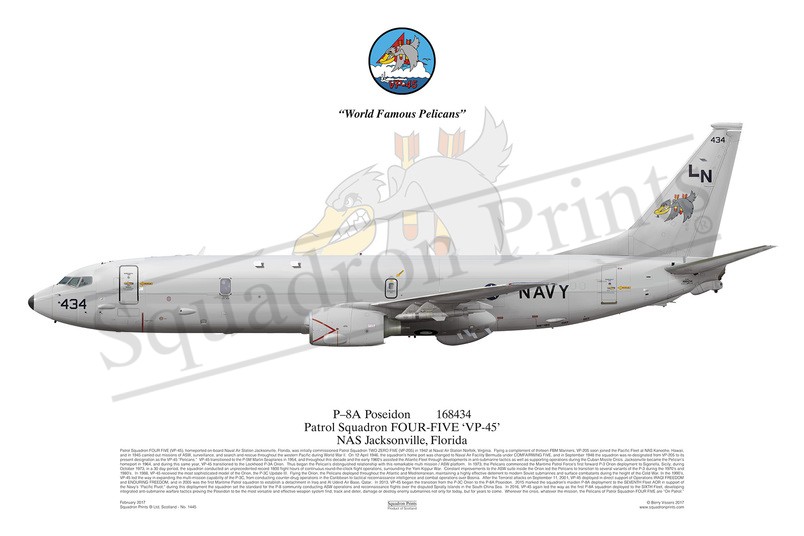 Squadron Prints Lithograph No. 1445 - 168434, P-8A Poseidon, Patrol Squadron FIUR-FIVE ;VP-45', NAS Jacksonville, Florida. Patrol Squadron FOUR FIVE (VP-45), homeported on-board Naval Air Station Jacksonville, Florida, was initially commissioned Patrol Squadron TWO ZERO FIVE (VP-205) in 1942 at Naval Air Station Norfolk, Virginia. Flying a complement of thirteen PBM Mariners, VP-205 soon joined the Paciï¬c Fleet at NAS Kaneohe, Hawaii, and in 1945 carried out missions of ASW, surveillance, and search and rescue throughout the western Pacific during World War ll. On 12 April 1946, the squadronâ€™s home port was changed to Naval Air Facility Bermuda under COMFAIRWING FIVE, and in September 1948 the squadron was re-designated from VP-205 to its present designation as the VP-45 â€œPelicans.â€ VP-45 transitioned to the P-5M Marlin Seaplanes in 1954, and throughout this decade and the early 1960â€™s assisted the Atlantic Fleet through developments in anti-submarine tactics as well as supporting operations during the Cuban Missile Crisis. Jacksonville became the Pelicanâ€™s homeport in 1964, and during this same year, VP-45 transitioned to the Lockheed P-3A Orion. Thus began the Pelicanâ€˜s distinguished relationship with this remarkable multi mission / ASW platform. In 1973, the Pelicans commenced the Maritime Patrol Forceâ€™s first forward P-3 Orion deployment to Sigonella, Sicily; during October 1973, in a 30 day period, the squadron conducted an unprecedented record 1800 flight hours of continuous round-the-clock flight operations, surrounding the Yom Kippur War. Constant improvements to the ASW suite inside the Orion led the Pelicans to transition to several variants of the P-3 during the 1970â€™s and 1980â€™s. In 1988, VP-45 received the most sophisticated model of the Orion, the P-3C Update III. Flying the Orion, the Pelicans deployed throughout the Atlantic and Mediterranean, maintaining a highly effective deterrent to modern Soviet submarines and surface combatants during the height of the Cold War. In the 1990â€™s, VP-45 led the way in expanding the multi-mission capability of the P-3C, from conducting counter-drug operations in the Caribbean to tactical reconnaissance intelligence and combat operations over Bosnia. After the Terrorist attacks on September 11, 2001, VP-45 deployed in direct support of Operations IRAQI FREEDOM and ENDURING FREEDOM, and in 2005 was the first Maritime Patrol squadron to establish a detachment in Iraq and Al Udeid Air Base, Qatar. In 2013, VP-45 began the transition from the P-3C Orion to the P-8A Poseidon. 2015 marked the squadronâ€™s maiden P-8A deployment to the SEVENTH Fleet AOR in support of the Navyâ€™s â€œPacific Pivot;â€ during this deployment the squadron set the standard for the P-8 community conducting ASW operations and reconnaissance flights over the disputed Spratly Islands in the South China Sea. In 2016, VP-45 again led the way as the first P-8A squadron deployed to the SIXTH Fleet, developing integrated anti-submarine warfare tactics proving the Poseidon to be the most versatile and effective weapon system find, track and deter, damage or destroy enemy submarines not only for today, but for years to come. Wherever the crisis, whatever the mission, the Pelicans of Patrol Squadron FOUR FIVE are â€œOn PatroI.â€