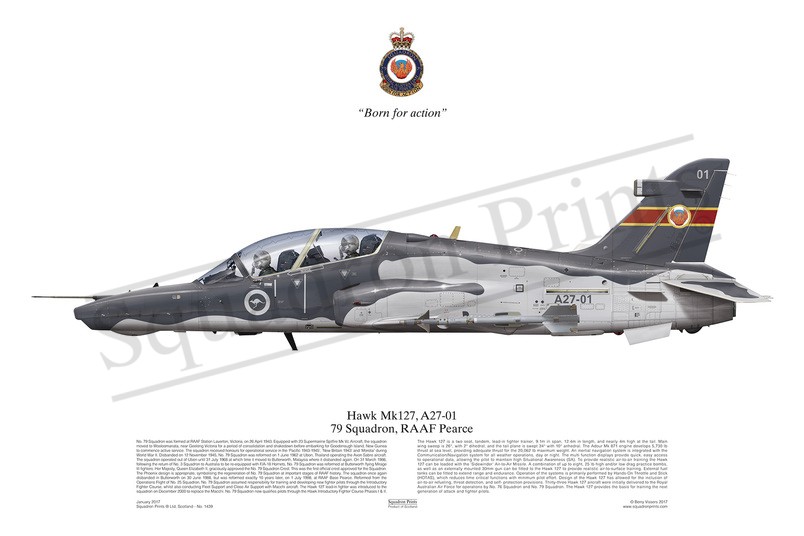 Squadron Prints Lithograph No. 1439 - A27-01, hawk Mk127, 79 Squadron, RAAF Pearce. No. 79 Squadron was formed at RAAF Station Laverton, Victoria, on 26 April 1943. Equipped with 23 Supermarine Spitfire Mk Vc Aircraft, the squadron moved to Wooloomanata, near Geelong Victoria for a period of consolidation and shakedown before embarking for Goodenough Island, New Guinea to commence active service. The squadron received honours for operational service in the â€˜Pacific 1943-1945â€™, â€˜New Britain 1943â€™ and â€˜Morotaiâ€™ during World War II. Disbanded on 12 November 1945, No. 79 Squadron was reformed on 1 June 1962 at Ubon, Thailand operating the Avon Sabre aircraft. The squadron operated out of Ubon until 31 July 1968 at which time it moved to Butterworth, Malaysia where it disbanded again. On 31 March 1986, following the return of No. 3 Squadron to Australia to be re-equipped with F/A-18 Hornets, No. 79 Squadron was reformed at Butterworth flying Mirage III fighters. Her Majesty, Queen Elizabeth II, graciously approved the No. 79 Squadron Crest. This was the first official crest approved for the Squadron. The Phoenix design is appropriate, symbolising the regeneration of No. 79 Squadron at important stages of RAAF history. The squadron once again disbanded in Butterworth on 30 June 1988, but was reformed exactly 10 years later, on 1 July 1998, at RAAF Base Pearce. Reformed from the Operations Flight of No. 25 Squadron, No. 79 Squadron assumed responsibility for training and developing new fighter pilots through the Introductory Fighter Course, whilst also conducting Fleet Support and Close Air Support with Macchi aircraft. The Hawk 127 lead-in fighter was introduced to the squadron on December 2000 to replace the Macchi. No. 79 Squadron now qualifies pilots through the Hawk Introductory Fighter Course Phases I & II. The Hawk 127 is a two seat, tandem, lead-in fighter trainer, 9.1m in span, 12.4m in length, and nearly 4m high at the tail. Main wing sweep is 26Â°, with 2Â° dihedral, and the tail plane is swept 34Â° with 10Â° anhedral. The Adour Mk 871 engine develops 5,730 lb thrust at sea level, providing adequate thrust for the 20,062 lb maximum weight. An inertial navigation system is integrated with the Communication/Navigation system for all weather operations, day or night. The multi function displays provide quick, easy access to operational data, allowing the pilot to maintain high Situational Awareness (SA). To provide realistic air-to-air training the Hawk 127 can be loaded with the â€˜Sidewinderâ€™ Air-to-Air Missile. A combination of up to eight, 25 lb high and/or low drag practice bombs, as well as an externally mounted 30mm gun can be fitted to the Hawk 127 to provide realistic air-to-surface training. External fuel tanks can be fitted to extend range and endurance. Operation of the systems is primarily performed by Hands-On Throttle and Stick (HOTAS), which reduces time critical functions with minimum pilot effort. Design of the Hawk 127 has allowed for the inclusion of air-to-air refueling, threat detection, and self- protection provisions. Thirty-three Hawk 127 aircraft were initially delivered to the Royal Australian Air Force for operations by No. 76 Squadron and No. 79 Squadron. The Hawk 127 provides the basis for training the next generation of attack and fighter pilots.