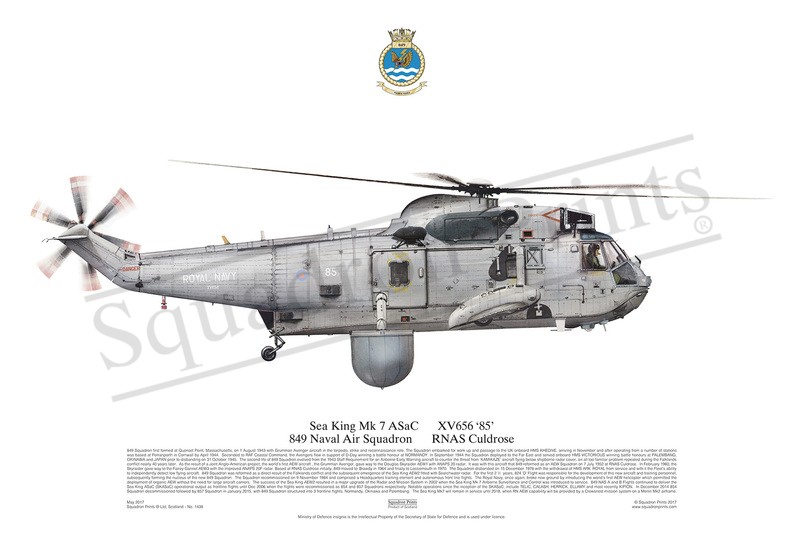 Squadron Prints Lithograph No. 1438 - XV656 '85', Sea King Mk 7 ASaC, 849 Naval Air Squadron, RNAS Culdrose. 849 Squadron first formed at Quonset Point, Massachusetts, on 1 August 1943 with Grumman Avenger aircraft in the torpedo, strike and reconnaissance role. The Squadron embarked for work up and passage to the UK onboard HMS KHEDIVE, arriving in November and after operating from a number of stations was based at Perranporth in Cornwall by April 1944. Seconded to RAF Coastal Command, the Avengers flew in support of D-Day winning a battle honour at NORMANDY. In September 1944 the Squadron deployed to the Far East and served onboard HMS VICTORIOUS winning battle honours at PALEMBANG, OKINAWA and JAPAN prior to disbanding on 31 October 1945. The second life of 849 Squadron evolved from the 1943 Staff Requirement for an Airborne Early Warning aircraft to counter the threat from â€˜KAMIKAZEâ€™ aircraft flying below shipborne radar cover, an all too familiar problem repeated during the Falklands conflict nearly 40 years later. As the result of a Joint Anglo-American project, the worldâ€™s first AEW aircraft , the Grumman Avenger, gave way to the Douglas Skyraider AEW1 with ANAPS 20 radar. It was with this aircraft that 849 reformed as an AEW Squadron on 7 July 1952 at RNAS Culdrose. In February 1960, the Skyraider gave way to the Fairey Gannet AEW3 with the improved ANAPS 20F radar. Based at RNAS Culdrose initially, 849 moved to Brawdy in 1964 and finally to Lossiemouth in 1970. The Squadron disbanded on 15 December 1978 with the withdrawal of HMS ARK ROYAL from service and with it the Fleetâ€™s ability to independently detect low flying aircraft. 849 Squadron was reformed as a direct result of the Falklands conflict and the subsequent emergence of the Sea King AEW2 fitted with Searchwater radar. For the first 2 Â½ years, 824 â€˜Dâ€™ Flight was responsible for the development of this new aircraft and training personnel, subsequently forming the nucleus of the new 849 Squadron. The Squadron recommissioned on 9 November 1984 and comprised a Headquarters training element and autonomous front line flights. The Royal Navy, once again, broke new ground by introducing the worldâ€™s first AEW helicopter which permitted the deployment of organic AEW without the need for large aircraft carriers. The success of the Sea King AEW2 resulted in a major upgrade of the Radar and Mission System in 2002 when the Sea King Mk 7 Airborne Surveillance and Control was introduced to service. 849 NAS A and B Flights continued to deliver the Sea King ASaC (SKASaC) operational output as frontline flights until Dec 2006 when the flights were recommissioned as 854 and 857 Squadrons respectively. Notable operations since the inception of the SKASaC, include TELIC, CALASH, HERRICK, ELLAMY and most recently KIPION. In December 2014 854 Squadron decommissioned followed by 857 Squadron in January 2015, with 849 Squadron structured into 3 frontline flights; Normandy, Okinawa and Palembang. The Sea King Mk7 will remain in service until 2018, when RN AEW capability will be provided by a Crowsnest mission system on a Merlin Mk2 airframe.