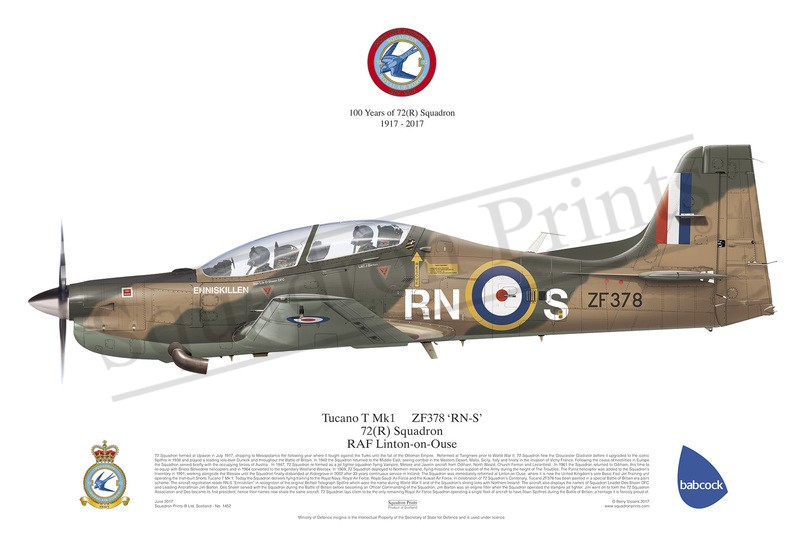 Squadron Prints Lithograph No. 1452 - ZF378 'RN-S', Tucano T Mk1, 72(R) Squadron, RAF Linton-on-Ouse. 72 Squadron formed at Upavon in July 1917, shipping to Mesopotamia the following year where it fought against the Turks until the fall of the Ottoman Empire. Reformed at Tangmere prior to World War II, 72 Squadron flew the Gloucester Gladiator before it upgraded to the iconic Spitfire in 1938 and played a leading role over Dunkirk and throughout the Battle of Britain. In 1942 the Squadron returned to the Middle East, seeing combat in the Western Desert, Malta, Sicily, Italy and finally in the invasion of Vichy France. Following the cease of hostilities in Europe the Squadron served briefly with the occupying forces of Austria. In 1947, 72 Squadron re-formed as a jet fighter squadron flying Vampire, Meteor and Javelin aircraft from Odiham, North Weald, Church Fenton and Leconfield. In 1961 the Squadron returned to Odiham, this time to re-equip with Bristol Belvedere helicopters and in 1964 converted to the legendary Westland Wessex. In 1969, 72 Squadron deployed to Northern Ireland, flying missions in close support of the Army during the height of The Troubles. The Puma helicopter was added to the Squadron's Inventory in 1991, working alongside the Wessex until the Squadron finally disbanded at Aldergrove in 2002 after 33 years continuous service in Ireland. The Squadron was immediately reformed at Linton-on-Ouse, where it is now the United Kingdom's sole Basic Fast Jet Training unit operating the Irish-built Shorts Tucano T Mk 1. Today the Squadron delivers flying training to the Royal Navy, Royal Air Force, Royal Saudi Air Force and the Kuwait Air Force. In celebration of 72 Squadron's Centenary, Tucano ZF378 has been painted in a special Battle of Britain era paint scheme. The aircraft registration reads RN-S "Enniskillen" in recognition of the original Belfast Telegraph Spitfire which wore the name during World War II and of the Squadron's strong links with Northern Ireland. The aircraft also displays the names of Squadron Leader Des Sheen DFC and Leading Aircraftman Jim Barton. Des Sheen served with the Squadron during the Battle of Britain before becoming an Officer Commanding of the Squadron; Jim Barton was an engine fitter when the Squadron operated the Vampire jet fighter. Jim went on to form the 72 Squadron Association and Des became its first president, hence their names now share the same aircraft. 72 Squadron lays claim to be the only remaining Royal Air Force Squadron operating a single fleet of aircraft to have flown Spitfires during the Battle of Britain, a heritage it is fiercely proud of.