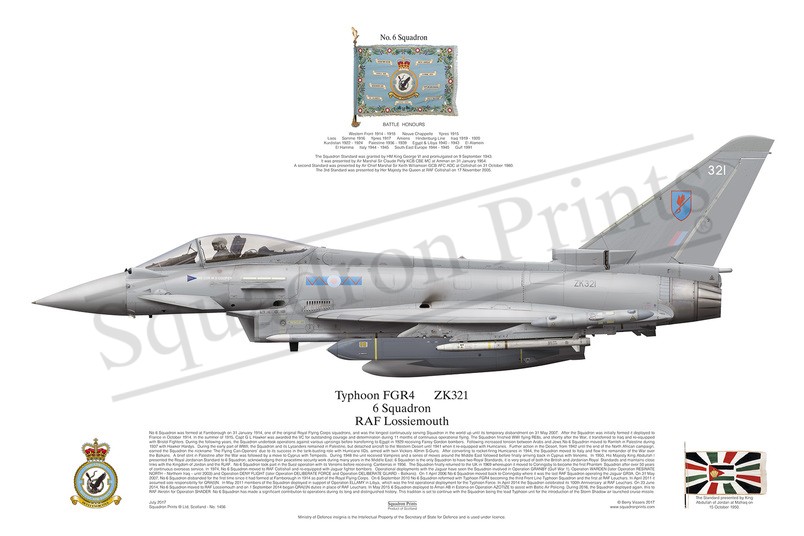 Squadron Prints Lithograph No. 1456 - ZK321, Typhoon FGR4, 6 Squadron, RAF Lossiemouth. No 6 Squadron was formed at Farnborough on 31 January 1914, one of the original Royal Flying Corps squadrons, and was the longest continuously serving Squadron in the world up until its temporary disbandment on 31 May 2007. After the Squadron was initially formed it deployed to France in October 1914. In the summer of 1915, Capt G L Hawker was awarded the VC for outstanding courage and determination during 11 months of continuous operational flying. The Squadron finished WWI flying RE8s, and shortly after the War, it transferred to Iraq and re-equipped with Bristol Fighters. During the following years, the Squadron undertook operations against various uprisings before transferring to Egypt in 1929 receiving Fairey Gordon bombers. Following increased tension between Arabs and Jews No 6 Squadron moved to Ramleh in Palestine during 1937 with Hawker Hardys. During the early part of WWII, the Squadron and its Lysanders remained in Palestine, but detached aircraft to the Western Desert until 1941 when it re-equipped with Hurricanes. Further action in the Desert, from 1942 until the end of the North African campaign, earned the Squadron the nickname 'The Flying Can-Openers' due to its success in the tank-busting role with Hurricane IIDs, armed with twin Vickers 40mm S-Guns. After converting to rocket-firing Hurricanes in 1944, the Squadron moved to Italy and flew the remainder of the War over the Balkans. A brief stint in Palestine after the War was followed by a move to Cyprus with Tempests. During 1948 the unit received Vampires and a series of moves around the Middle East followed before finally arriving back in Cyprus with Venoms. In 1950, His Majesty King Abdullah I presented the Royal Jordanian Standard to 6 Squadron, acknowledging their peacetime security work during many years in the Middle East. 6 Squadron is the only Squadron to have two Royal Standards, it is very proud of both the British and Jordanian Royal Standards and maintains close links with the Kingdom of Jordan and the RJAF. No 6 Squadron took part in the Suez operation with its Venoms before receiving Canberras in 1956. The Squadron finally returned to the UK in 1969 whereupon it moved to Coningsby to become the first Phantom Squadron after over 50 years of continuous overseas service. In 1974, No 6 Squadron moved to RAF Coltishall and re-equipped with Jaguar fighter bombers. Operational deployments with the Jaguar have seen the Squadron involved in Operation GRANBY (Gulf War 1), Operation WARDEN (later Operation RESINATE NORTH â€“ Northern Iraq â€“ until 2003) and Operation DENY FLIGHT (later Operation DELIBERATE FORCE and Operation DELIBERATE GUARD â€“ Balkans). On 1 April 2006 No 6 Squadron moved back to Coningsby where it was the last RAF Squadron operating the Jaguar GR3A. On 31 May 2007, No 6 Squadron disbanded for the first time since it had formed at Farnborough in 1914 as part of the Royal Flying Corps. On 6 September 2010 No 6 Squadron reformed with Typhoon FGR4 becoming the third Front Line Typhoon Squadron and the first at RAF Leuchars. In April 2011 it assumed sole responsibility for QRA(I)N. In May 2011 members of the Squadron deployed in support of Operation ELLAMY in Libya, which was the first operational deployment for the Typhoon Force. In April 2014 the Squadron celebrated its 100th Anniversary at RAF Leuchars. On 23 June 2014, No 6 Squadron moved to RAF Lossiemouth and on 1 September 2014 began QRA(I)N duties in place of RAF Leuchars. In May 2015 6 Squadron deployed to Ã„mari AB in Estonia on Operation AZOTIZE to assist with Baltic Air Policing. During 2016, the Squadron deployed again, this to RAF Akrotiri for Operation SHADER. No 6 Squadron has made a significant contribution to operations during its long and distinguished history. This tradition is set to continue with the Squadron being the lead Typhoon unit for the introduction of the Storm Shadow air launched cruise missile.