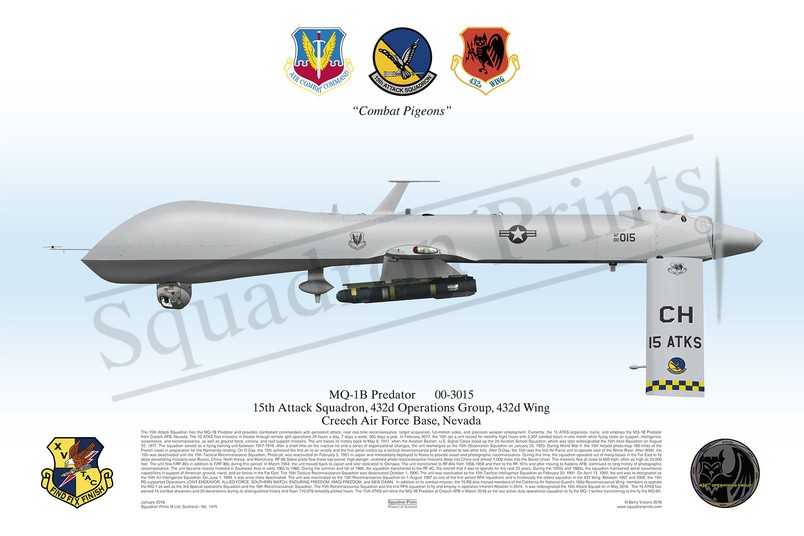 Squadron Prints Lithograph No. 1475 - 00-3015, MQ-1 Predator, 15th Attack Squadron, 432nd Operations Group, 432nd Wing, Chreech AFB, Nevada. The 15th Attack Squadron flies the MQ-1B Predator and provides combatant commanders with persistent attack, near real-time reconnaissance, target acquisition, full-motion video, and precision weapon employment. Currently, the 15 ATKS organizes, trains, and employs the MQ-1B Predator from Creech AFB, Nevada. The 15 ATKS flies missions in theater through remote split operations 24 hours a day, 7 days a week, 365 days a year. In February 2017, the 15th set a unit record for monthly flight hours with 5,397 combat hours in one month while flying close air support, intelligence, surveillance, and reconnaissance, as well as ground force, convoy, and raid support missions. The unit traces its history back to May 9, 1917, when the Aviation Section, U.S. Signal Corps stood up the 2d Aviation School Squadron, which was later redesignated the 15th Aero Squadron on August 22, 1917. The squadron served as a flying training unit between 1917-1919. After a short time on the inactive list and a series of organizational changes, the unit reemerged as the 15th Observation Squadron on January 25, 1923. During World War II, the 15th helped photo-map 160 miles of the French coast in preparation for the Normandy landing. On D-Day, the 15th achieved the first air to air victory and the first aerial victory by a tactical reconnaissance pilot in addition to two other kills. After D-Day, the 15th was the first Air Force unit to operate east of the Rhine River. After WWII, the 15th was deactivated until the 15th Tactical Reconnaissance Squadron, Photo-jet, was reactivated on February 5, 1951 in Japan and immediately deployed to Korea to provide visual and photographic reconnaissance. During this time, the squadron operated out of many bases in the Far East to fly deep penetrating missions over Russia, China, North Korea, and Manchuria. RF-86 Sabre pilots flew these top-secret, high-danger, unarmed photo reconnaissance missions deep into China and almost 1,000 miles into the Soviet Union. The missions flew at close to 600 mph, often as high as 55,000 feet. The unit flew F/RF-80s in addition to F/RF-86s during this period. In March 1954, the unit moved back to Japan and later relocated to Okinawa. The unit transitioned to RF-84s from 1956-1958 and then to the RF-101s and after moving to Kadena AFB, continued its long history of photographic reconnaissance. The unit became heavily involved in Southeast Asia in early 1965 to 1966. During the summer and fall of 1966, the squadron transitioned to the RF-4C, the aircraft that it was to operate for the next 25 years. During the 1970s and 1980s, the squadron maintained aerial surveillance capabilities in support of American ground, naval, and air forces in the Far East. The 15th Tactical Reconnaissance Squadron was deactivated October 1, 1990. The unit was reactivated as the 15th Tactical Intelligence Squadron on February 20, 1991. On April 13, 1992, the unit was re-designated as the 15th Air Intelligence Squadron. On June 1, 1994, it was once more deactivated. The unit was reactivated as the 15th Reconnaissance Squadron on 1 August 1997 as one of the first armed RPA squadrons and is historically the oldest squadron in the 432 Wing. Between 1997 and 2005, the 15th RS supported Operations JOINT ENDEAVOR, ALLIED FORCE, SOUTHERN WATCH, ENDURING FREEDOM, IRAQI FREEDOM, and NEW DAWN. In addition to its combat mission, the 15 RS also trained members of the California Air National Guardâ€™s 163d Reconnaissance Wing members to operate the MQ-1 as well as the 3rd Special operations Squadron and the 18th Reconnaissance Squadron. The 15th Reconnaissance Squadron was the first RPA squadron to fly and employ in operation Inherent Resolve in 2014. It was redesignated the 15th Attack Squadron in May 2016. The 15 ATKS has earned 15 combat streamers and 20 decorations during its distinguished history and flown 710,078 remotely piloted hours. The 15th ATKS will retire the MQ-1B Predator at Creech AFB in March 2018 as the last active duty operational squadron to fly the MQ-1 before transitioning to the fly the MQ-9A.