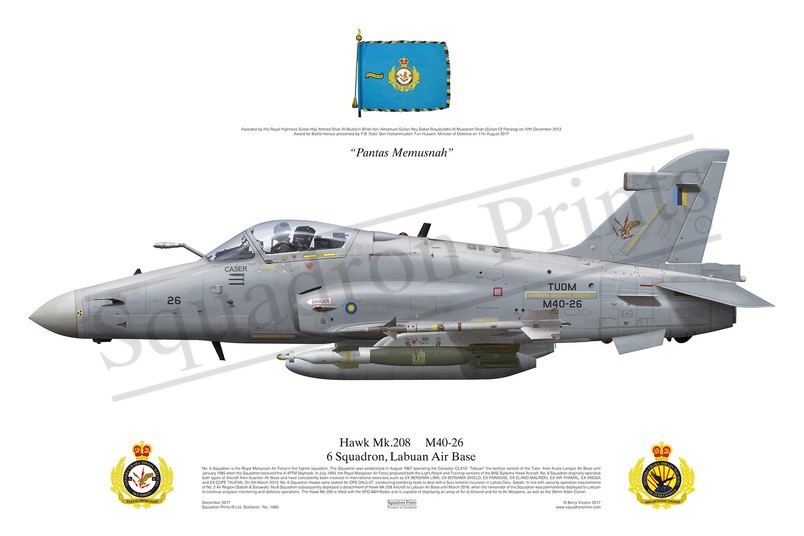 Squadron Prints Lithograph No. 1469 - M40-26, Hawk Mk.208, 6 Squadron, Labuan Air Base. No. 6 Squadron is the Royal Malaysian Air Forceâ€™s first fighter squadron. The Squadron was established in August 1967 operating the Canadair CL41G â€œTebuanâ€ the tactical version of the Tutor, from Kuala Lumpur Air Base until January 1985 when the Squadron received the A-4PTM Skyhawk. In July 1993, the Royal Malaysian Air Force procured both the Light Attack and Training versions of the BAE Systems Hawk Aircraft. No. 6 Squadron originally operated both types of Aircraft from Kuantan Air Base and have consistently been involved in International exercises such as EX BERSAMA LIMA, EX BERSAMA SHIELD, EX PARADISE, EX ELANG MALINDO, EX AIR THAMAL, EX ANGSA and EX COPE TAUFAN. On 5th March 2013, No. 6 Squadron Hawks were tasked for OPS DAULAT, conducting bombing raids to deal with a Sulu terrorist incursion in Lahad Datu, Sabah. In line with security operation requirements of No. 2 Air Region (Sabah & Sarawak), No.6 Squadron subsequently deployed a detachment of Hawk Mk.208 Aircraft to Labuan Air Base until March 2016, when the remainder of the Squadron was permanently deployed to Labuan to continue airspace monitoring and defence operations. The Hawk Mk.208 is fitted with the APG-66H Radar and is capable of deploying an array of Air to Ground and Air to Air Weapons, as well as the 30mm Aden Canon.