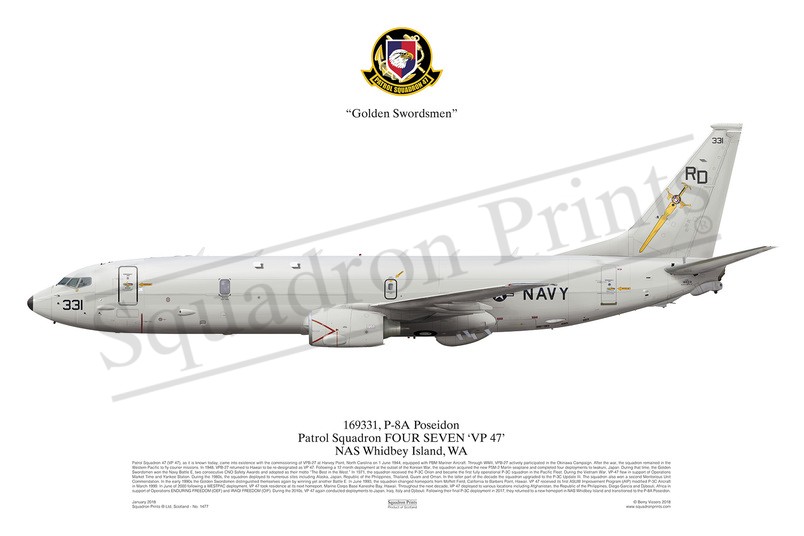 Squadron Prints Lithograph No. 1477 - 169331, P-8A Poseidon, Ptarol Squadron FOUR SEVEN 'VP-47', NAS Whidbey Island, WA. Patrol Squadron 47 (VP 47), as it is known today, came into existence with the commissioning of VPB-27 at Harvey Point, North Carolina on 1 June 1944, equipped with PBM Mariner Aircraft. Through WWII, VPB-27 actively participated in the Okinawa Campaign. After the war, the squadron remained in the Western Pacific to fly courier missions. In 1948, VPB-27 returned to Hawaii to be re-designated as VP 47. Following a 12 month deployment at the outset of the Korean War, the squadron acquired the new P5M-2 Marlin seaplane and completed four deployments to lwakuni, Japan. During that time, the Golden Swordsmen won the Navy Battle E, two consecutive CNO Safety Awards and adopted as their motto "The Best in the West." In 1971, the squadron received the P-3C Orion and became the first fully operational P-3C squadron in the Pacific Fleet. During the Vietnam War, VP-47 flew in support of Operations Market Time and Yankee Station. During the 1980s, the squadron deployed to numerous sites including Alaska, Japan, Republic of the Philippines, Thailand, Guam and Oman. In the latter part of the decade the squadron upgraded to the P-3C Update III. The squadron also won a second Meritorious Unit Commendation. In the early 1990s the Golden Swordsmen distinguished themselves again by winning yet another Battle E. In June 1993, the squadron changed homeports from Moffett Field, California to Barbers Point, Hawaii. VP 47 received its first ASUW Improvement Program (AIP) modified P-3C Aircraft in March 1999. In June of 2000 following a WESTPAC deployment, VP 47 took residence at its next homeport, Marine Corps Base Kaneohe Bay, Hawaii. Throughout the next decade, VP 47 deployed to various locations including Afghanistan, the Republic of the Philippines, Diego Garcia and Djibouti, Africa in support of Operations ENDURING FREEDOM (OEF) and IRAQI FREEDOM (OIF). During the 2010s, VP 47 again conducted deployments to Japan, Iraq, Italy and Djibouti. Following their final P-3C deployment in 2017, they returned to a new homeport in NAS Whidbey Island and transitioned to the P-8A Poseidon.