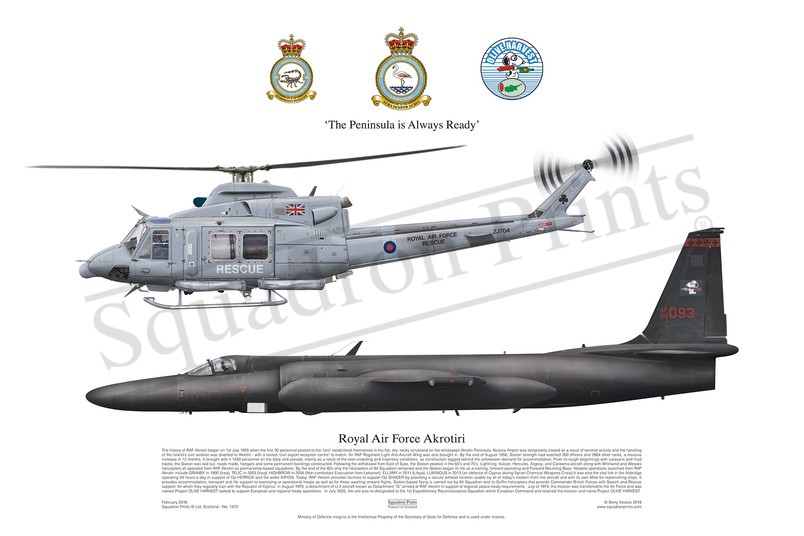 Squadron Prints Lithograph No. 1472 - Royal Air Force Akrotiri. The history of RAF Akrotiri began on 1st July 1955 when the first 30 personnel posted to the â€˜Unitâ€™ established themselves in the flat, dry, rocky scrubland on the windswept Akrotiri Peninsula. Nicosia Airport was temporarily closed as a result of terrorist activity and the handling of the Islandâ€™s civil aviation was diverted to Akrotiri - with a tented â€˜civil airport reception centreâ€™ to match. An RAF Regiment Light Anti-Aircraft Wing was also brought in. By the end of August 1956, Station strength had reached 260 officers and 2864 other ranks, a massive increase in 12 months. It brought with it 1430 personnel on the daily sick-parade, mainly as a result of the over-crowding and insanitary conditions, as construction lagged behind the unforeseen demand for accommodation. From its rough beginnings with caravans and mud tracks, the Station was laid out, roads made, hangars and some permanent buildings constructed. Following the withdrawal from East of Suez, the Station peaked in the 60â€™s and 70â€™s; Lightning, Vulcan, Hercules, Argosy, and Canberra aircraft along with Whirlwind and Wessex helicopters all operated from RAF Akrotiri as permanently-based squadrons. By the end of the 80s only the helicopters of 84 Squadron remained and the Station began its life as a training, forward operating and Forward Mounting Base. Notable operations launched from RAF Akrotiri include GRANBY in 1990 (Iraq), TELIC in 2003 (Iraq), HIGHBROW in 2006 (Non-combatant Evacuation from Lebanon), ELLAMY in 2011 (Libya), LUMINOUS in 2013 (air defence of Cyprus during Syrian Chemical Weapons Crisis) It was also the vital link in the Airbridge operating 24 hours a day in support of Op HERRICK and the wider KIPION. Today, RAF Akrotiri provides facilities to support Op SHADER by providing a secure airhead location usable by all of todayâ€™s modern front line aircraft and with its own Mole for replenishing ships. It provides accommodation, transport and life support to exercising or operational troops as well as for those awaiting onward flights. Station-based flying is carried out by 84 Squadron and its Griffin helicopters that provide Commander British Forces with Search and Rescue support, for which they regularly train with the Republic of Cyprus. In August 1970, a detachment of U-2 aircraft known as Detachment â€œGâ€ arrived at RAF Akrotiri in support of regional peace treaty requirements. July of 1974, the mission was transferred to the Air Force and was named Project OLIVE HARVEST tasked to support European and regional treaty operations. In July 2005, the unit was re-designated to the 1st Expeditionary Reconnaissance Squadron within European Command and retained the mission and name Project OLIVE HARVEST.