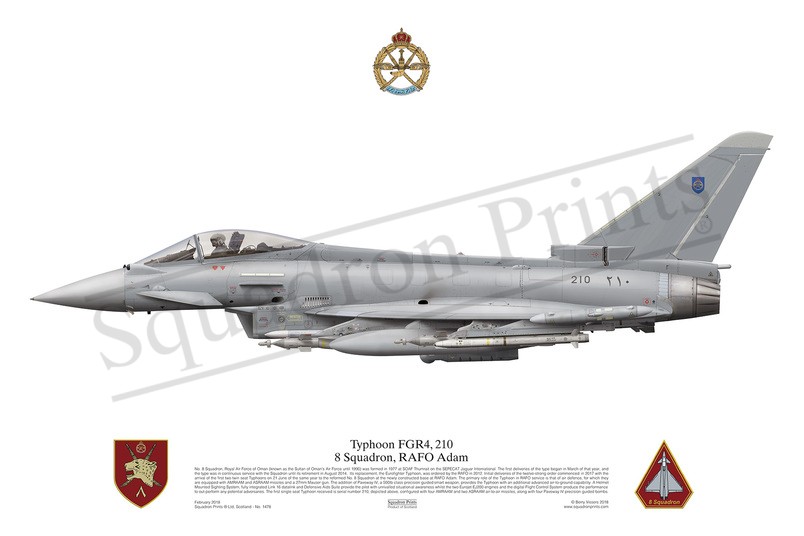 Squadron Prints Lithograph No. 1478 - 210, Typhoon FGR4, 8 Squadron, RAFO Adam. No. 8 Squadron, Royal Air Force of Oman (known as the Sultan of Oman's Air Force until 1990) was formed in 1977 at SOAF Thumrait on the SEPECAT Jaguar International. The first deliveries of the type began in March of that year, and the type was in continuous service with the Squadron until its retirement in August 2014. Its replacement, the Eurofighter Typhoon, was ordered by the RAFO in 2012. Initial deliveries of the twelve-strong order commenced in 2017 with the arrival of the first two twin seat Typhoons on 21 June of the same year to the reformed No. 8 Squadron at the newly constructed base at RAFO Adam. The primary role of the Typhoon in RAFO service is that of air defence, for which they are equipped with AMRAAM and ASRAAM missiles and a 27mm Mauser gun. The addition of Paveway IV, a 500lb class precision guided smart weapon, provides the Typhoon with an additional advanced air-to-ground capability. A Helmet Mounted Sighting System, fully integrated Link 16 datalink and Defensive Aids Suite provide the pilot with unrivalled situational awareness whilst the two Eurojet EJ200 engines and the digital Flight Control System produce the performance to out-perform any potential adversaries. The first single seat Typhoon received is serial number 210, depicted above, configured with four AMRAAM and two ASRAAM air-to-air missiles, along with four Paveway IV precision guided bombs.