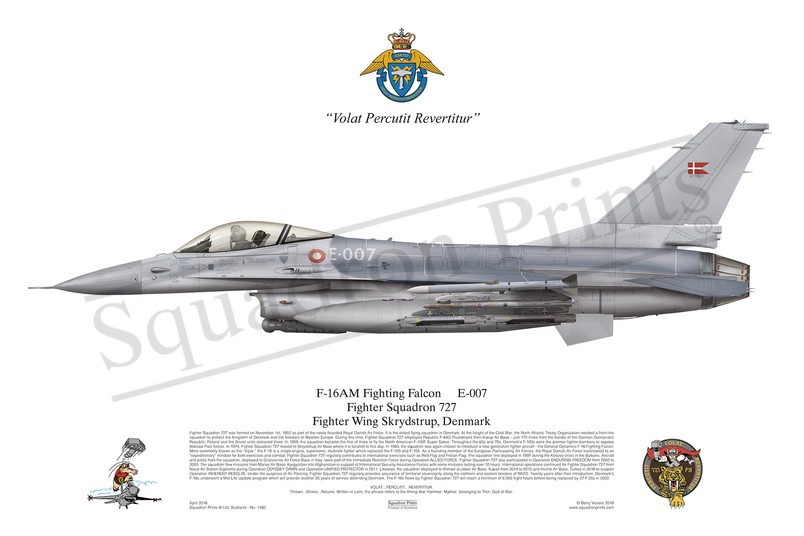 Squadron Prints Lithograph No. 1480 - E-007, F-16AM Fighting Falcon, Fighter Squadron 727, Fighter Wing Skrydstrup, Denmark. Fighter Squadron 727 was formed on November 1st, 1952 as part of the newly-founded Royal Danish Air Force. It is the oldest flying squadron in Denmark. At the height of the Cold War, the North Atlantic Treaty Organization needed a front-line squadron to protect the Kingdom of Denmark and the freedom of Western Europe. During this time, Fighter Squadron 727 employed Republic F-84G Thunderjets from Karup Air Base â€“ just 175 miles from the border of the German Democratic Republic, Poland and the Soviet units stationed there. In 1959, the squadron became the first of three to fly the North American F-100F Super Sabre. Throughout the 60s and 70s, Denmarkâ€™s F-100s were the premier fighter-bombers to oppose Warsaw Pact forces. In 1974, Fighter Squadron 727 moved to Skrydstrup Air Base where it is located to this day. In 1980, the squadron was again chosen to introduce a new generation fighter aircraft - the General Dynamics F-16 Fighting Falcon. More commonly known as the â€œViper,â€ the F-16 is a single-engine, supersonic, multirole fighter which replaced the F-100 and F-104. As a founding member of the European Participating Air Forces, the Royal Danish Air Force transitioned to an â€œexpeditionaryâ€ mindset for both exercises and combat. Fighter Squadron 727 regularly contributes to international exercises such as Red Flag and Frisian Flag. The squadron first deployed in 1997 during the Kosovo crisis in the Balkans. Aircraft and pilots from the squadron, deployed to Grazzanise Air Force Base in Italy, were part of the Immediate Reaction Force during Operation ALLIED FORCE. Fighter Squadron 727 also participated in Operation ENDURING FREEDOM from 2002 to 2003. The squadron flew missions from Manas Air Base, Kyrgyzstan into Afghanistan in support of International Security Assistance Forces with some missions lasting over 10 hours. International operations continued for Fighter Squadron 727 from Naval Air Station Sigonella during Operation ODYSSEY DAWN and Operation UNIFIED PROTECTOR in 2011. Likewise, the squadron deployed to Ahmad al-Jaber Air Base, Kuwait from 2014 to 2015 and Incirlik Air Base, Turkey in 2016 to support Operation INHERENT RESOLVE. Under the auspices of Air Policing, Fighter Squadron 727 regularly provides assurance of territorial sovereignty along the northern and eastern borders of NATO. Twenty years after their introduction, Denmarkâ€™s F-16s underwent a Mid Life Update program which will provide another 20 years of service defending Denmark. The F-16s flown by Fighter Squadron 727 will reach a minimum of 6,000 flight hours before being replaced by 27 F-35s in 2022.