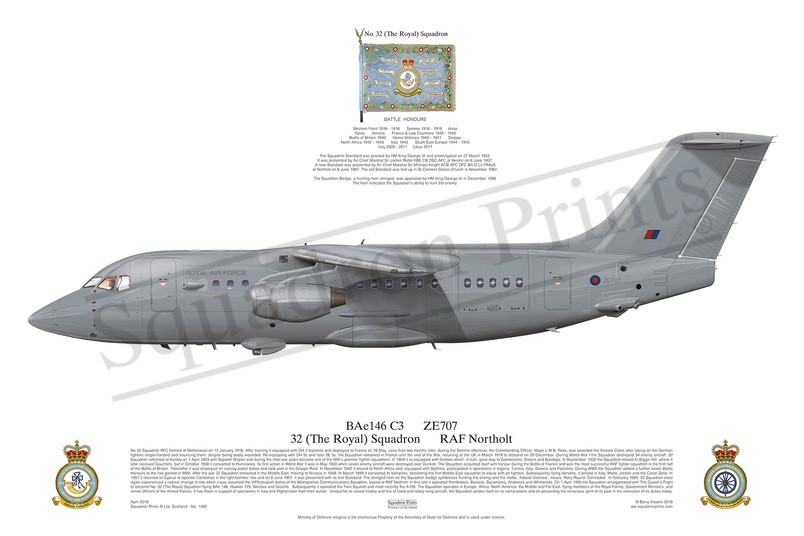 Squadron Prints Lithograph No. 1492 - ZE707, BAe146 C3, 32(The Royal) Squadron, RAF Northolt. No 32 Squadron RFC formed at Netheravon on 12 January 1916. After training it equipped with DH 2 biplanes and deployed to France on 28 May. Less than two months later, during the Somme offensive, the Commanding Officer, Major L.W.B. Rees, was awarded the Victoria Cross after taking on ten German fighters single-handed and trouncing them, despite being badly wounded. Re-equipping with DH 5s and later SE 5s, the Squadron remained in France until the end of the War, returning to the UK in March 1919 to disband on 29 December. During World War I the Squadron destroyed 34 enemy aircraft. 32 Squadron reformed at Kenley on 1 April 1923 with Sopwith Snipes and during the inter-war years became one of the RAFâ€™s premier fighter squadrons. In 1924 it re-equipped with Grebes which, in turn, gave way to Gamecocks, Siskins and Bulldogs. In September 1932 the Squadron moved to Biggin Hill, where it later received Gauntlets, but in October 1938 it converted to Hurricanes. Its first action in World War II was in May 1940 when seven enemy aircraft were destroyed over Dunkirk. The Squadron acquitted itself with honour during the Battle of France and was the most successful RAF fighter squadron in the first half of the Battle of Britain. Thereafter it was employed on convoy patrol duties and took part in the Dieppe Raid. In November 1942 it moved to North Africa and, equipped with Spitfires, participated in operations in Algeria, Tunisia, Italy, Greece and Palestine. During WWII the Squadron added a further seven Battle Honours to the five gained in WWI. After the war 32 Squadron remained in the Middle East, moving to Nicosia in 1948. In March 1949 it converted to Vampires, becoming the first Middle East squadron to equip with jet fighters. Subsequently flying Venoms, it served in Iraq, Malta, Jordan and the Canal Zone. In 1957 it returned to Cyprus to operate Canberras in the light-bomber role and on 6 June 1957, it was presented with its first Standard. The stringed horn on the Squadron badge symbolises hunting the enemy and the motto, â€˜Adeste Comitesâ€™, means â€˜Rally Round, Comradesâ€™. In February 1969, 32 Squadron once again experienced a radical change in role when it was assumed the VIP/transport duties of the Metropolitan Communications Squadron, based at RAF Northolt. In this role it operated Pembrokes, Bassets, Sycamores, Andovers and Whirlwinds. On 1 April 1995 the Squadron amalgamated with The Queenâ€™s Flight to become No. 32 (The Royal) Squadron flying BAe 146, Hawker 125, Wessex and Gazelle. Subsequently it operated the Twin Squirrel and most recently the A109. The Squadron operates in Europe, Africa, North America, the Middle and Far East, flying members of the Royal Family, Government Ministers, and senior officers of the Armed Forces. It has flown in support of operations in Iraq and Afghanistan from their outset. Unique for its varied history and mix of fixed and rotary wing aircraft, the Squadron prides itself on its camaraderie and on preserving the tenacious spirit of its past in the execution of its duties today.