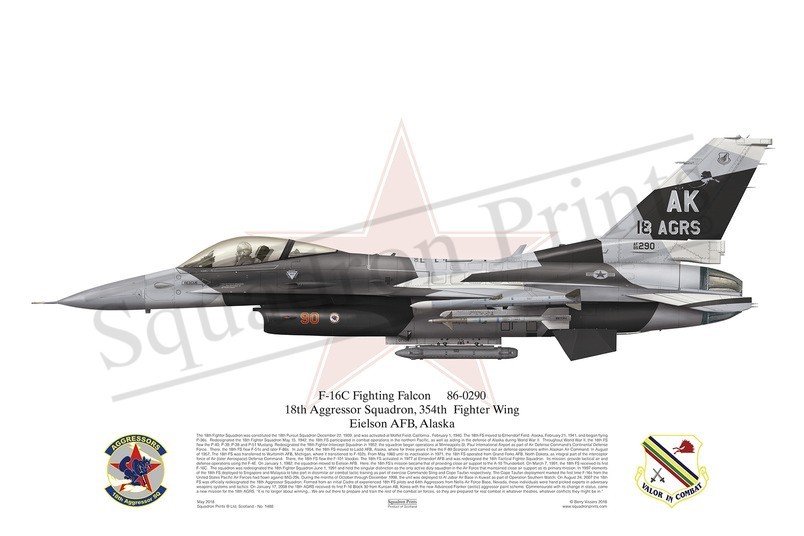 Squadron Prints Lithograph No, 1488 - 86-0290 '90', F-16C Fighting Falcon, 18th Aggressor Squadron, 354th Fighter Wing, Eielson AFB, Alaska. The 18th Fighter Squadron was constituted the 18th Pursuit Squadron December 22, 1939, and was activated at Moffet Field, California., February 1, 1940. The 18th FS moved to Elmendorf Field, Alaska, February 21, 1941, and began flying P-36s. Redesignated the 18th Fighter Squadron May 15, 1942, the 18th FS participated in combat operations in the northern Pacific, as well as aiding in the defense of Alaska during World War II. Throughout World War II, the 18th FS flew the P-40, P-39, P-38 and P-51 Mustang. Redesignated the 18th Fighter-Intercept Squadron in 1952, the squadron began operations at Minneapolis-St. Paul International Airport as part of Air Defense Commandâ€™s Continental Defense Force. There, the 18th FS flew F-51s and later F-86s. In July 1954, the 18th FS moved to Ladd AFB, Alaska, where for three years it flew the F-89 Scorpion and carried out air defense operations within Alaskan Air Command. In August of 1957, The 18th FS was transferred to Wurtsmith AFB, Michigan, where it transitioned to F-102s. From May 1960 until its inactivation in 1971, the 18th FS operated from Grand Forks AFB, North Dakota, as integral part of the interceptor force of Air (later Aerospace) Defense Command. There, the 18th FS flew the F-101 Voodoo. The 18th FS activated in 1977 at Elmendorf AFB and was redesigned the 18th Tactical Fighter Squadron. Its mission: provide tactical air and defense operations using the F-4E. On January 1, 1982, the squadron moved to Eielson AFB. Here, the 18th FSâ€™s mission became that of providing close air support to the A-10 Thunderbolt. On March 7, 1991, the 18th FS received its first F-16C. The squadron was redesignated the 18th Fighter Squadron June 1, 1991 and held the singular distinction as the only active duty squadron in the Air Force that maintained close air support as its primary mission. In 1997 elements of the 18th FS deployed to Singapore and Malaysia to take part in dissimilar air combat tactic training as part of exercise Commando Sling and Cope Taufan respectively. The Cope Taufan deployment marked the first time F-16s from the United States Pacific Air Forces had flown against MiG-29s. During the months of October through December 1998, the unit was deployed to Al Jabar Air Base in Kuwait as part of Operation Southern Watch. On August 24, 2007 the 18th FS was officially redesignated the 18th Aggressor Squadron. Formed from an initial Cadre of experienced 18th FS pilots and 64th Aggressors from Nellis Air Force Base, Nevada, these individuals were hand picked experts in adversary weapons systems and tactics. On January 17, 2008 the 18th AGRS received its first F-16 Block 30 from Kunsan AB, Korea with the new Advanced Flanker (arctic) aggressor paint scheme. Commensurate with its change in status, came a new mission for the 18th AGRS. â€œIt is no longer about winning,...We are out there to prepare and train the rest of the combat air forces, so they are prepared for real combat in whatever theatres, whatever conflicts they might be in.