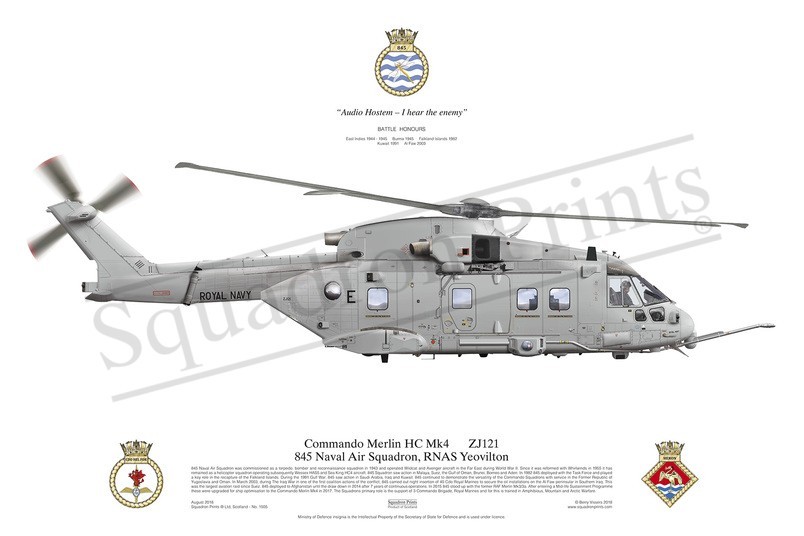 Squadron Prints Lithograph No. 1505 - ZJ212 'E', Merlin HC4, 845 Naval Air Squadron, RNAS Yeovilton. 845 Naval Air Squadron was commissioned as a torpedo, bomber and reconnaissance squadron in 1943 and operated Wildcat and Avenger aircraft in the Far East during World War II. Since it was reformed with Whirlwinds in 1955 it has remained as a helicopter squadron operating subsequently Wessex HAS5 and Sea King HC4 aircraft. 845 Squadron saw action in Malaya, Suez, the Gulf of Oman, Brunei, Borneo and Aden. In 1982 845 deployed with the Task Force and played a key role in the recapture of the Falkland Islands. During the 1991 Gulf War, 845 saw action in Saudi Arabia, Iraq and Kuwait. 845 continued to demonstrate the versatility of the Commando Squadrons with service in the Former Republic of Yugoslavia and Oman. In March 2003, during The Iraq War in one of the first coalition actions of the conflict, 845 carried out night insertion of 40 Cdo Royal Marines to secure the oil installations on the Al Faw peninsular in Southern Iraq. This was the largest aviation raid since Suez. 845 deployed to Afghanistan until the draw down in 2014 after 7 years of continuous operations. In 2015 845 stood up with the former RAF Merlin Mk3/3a. After entering a Mid-life Sustainment Programme these were upgraded for ship optimisation to the Commando Merlin Mk4 in 2017. The Squadrons primary role is the support of 3 Commando Brigade, Royal Marines and for this is trained in Amphibious, Mountain and Arctic Warfare.