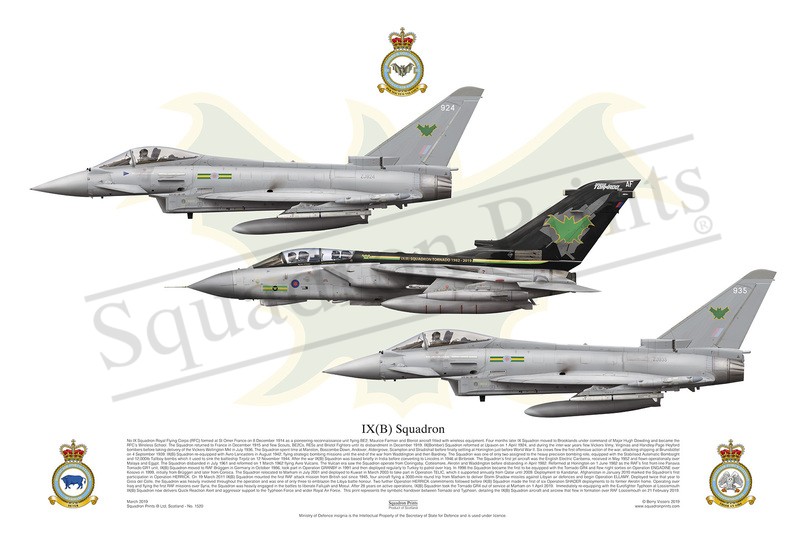 Squadron Prints Lithograph No. 1520 - IX(B) Squadron. No IX Squadron Royal Flying Corps (RFC) formed at St Omer France on 8 December 1914 as a pioneering reconnaissance unit flying BE2, Maurice Farman and Bleriot aircraft fitted with wireless equipment. Four months later IX Squadron moved to Brooklands under command of Major Hugh Dowding and became the RFC's Wireless School. The Squadron returned to France in December 1915 and flew Scouts, BE2Cs, RE5s and Bristol Fighters until its disbandment in December 1919. IX(Bomber) Squadron reformed at Upavon on 1 April 1924, and during the inter-war years flew Vickers Vimy, Virginias and Handley-Page Heyford bombers before taking delivery of the Vickers Wellington MkI in July 1936. The Squadron spent time at Manston, Boscombe Down, Andover, Aldergrove, Scampton and Stradishall before finally settling at Honington just before World War II. Six crews flew the first offensive action of the war, attacking shipping at Brunsbuttel on 4 September 1939. IX(B) Squadron re-equipped with Avro Lancasters in August 1942, flying strategic bombing missions until the end of the war from Waddington and then Bardney. The Squadron was one of only two assigned to the heavy precision bombing role, equipped with the Stabilised Automatic Bombsight and 12,000lb Tallboy bombs which it used to sink the battleship Tirpitz on 12 November 1944. After the war IX(B) Squadron was based briefly in India before converting to Lincolns in 1946 at Binbrook. The Squadron's first jet aircraft was the English Electric Canberra, received in May 1952 and flown operationally over Malaya and Egypt. The Squadron disbanded in July 1961 and reformed on 1 March 1962 flying Avro Vulcans. The Vulcan era saw the Squadron operate from Coningsby, Cottesmore, Akrotiri and Waddington before disbanding in April 1982. Reformed at Honington on 1 June 1982 as the RAF's first front-line Panavia Tornado GR1 unit, IX(B) Squadron moved to RAF Bruggen in Germany in October 1986, took part in Operation GRANBY in 1991 and then deployed regularly to Turkey to patrol over Iraq. In 1998 the Squadron became the first to be equipped with the Tornado GR4 and flew night sorties on Operation ENGADINE over Kosovo in 1999, initially from Bruggen and later from Corsica. The Squadron relocated to Marham in July 2001 and deployed to Kuwait in March 2003 to take part in Operation TELIC, which it supported annually from Qatar until 2009. Deployment to Kandahar, Afghanistan in January 2010 marked the Squadronâ€™s first participation in Operation HERRICK. On 19 March 2011 IX(B) Squadron mounted the first RAF attack mission from British soil since 1945, four aircraft flying a 3000-mile round trip from Marham to deliver Storm Shadow missiles against Libyan air defences and begin Operation ELLAMY. Deployed twice that year to Gioia del Colle, the Squadron was heavily involved throughout the operation and was one of only three to emblazon the Libya battle honour. Two further Operation HERRICK commitments followed before IX(B) Squadron made the first of six Operation SHADER deployments to its former Akrotiri home. Operating over Iraq and flying the first RAF missions over Syria, the Squadron was heavily engaged in the battles to liberate Fallujah and Mosul. After 28 years on active operations, IX(B) Squadron took the Tornado GR4 out of service at Marham on 1 April 2019. Immediately re-equipping with the Eurofighter Typhoon at Lossiemouth IX(B) Squadron now delivers Quick Reaction Alert and aggressor support to the Typhoon Force and wider Royal Air Force. This print represents the symbolic handover between Tornado and Typhoon, detailing the IX(B) Squadron aircraft and aircrew that flew in formation over RAF Lossiemouth on 21 February 2019.