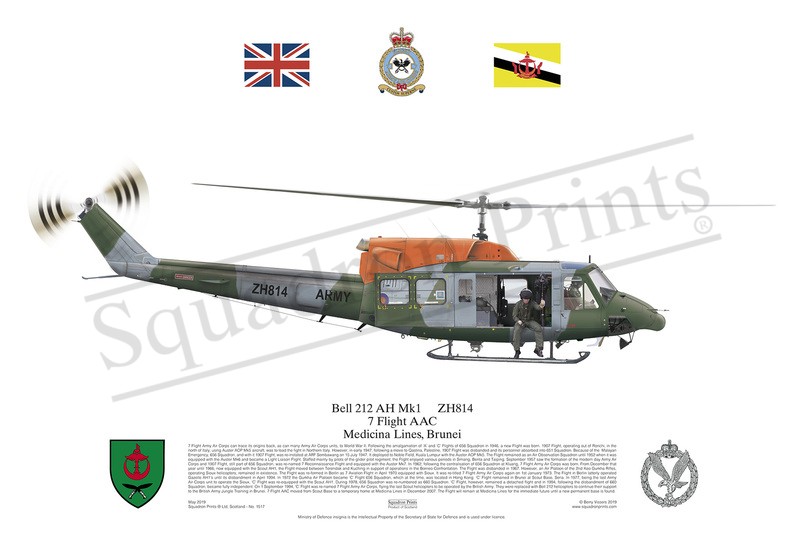 Squadron Prints Lithograph No. 1517 - ZH814, Bell 212 AH Mk1, 7 Flight AAC, Medicina Lines, Brunei. 7 Flight Army Air Corps can trace its origins back, as can many Army Air Corps units, to World War II. Following the amalgamation of â€˜Aâ€™ and â€˜Câ€™ Flights of 656 Squadron in 1946, a new Flight was born. 1907 Flight, operating out of Ronchi, in the north of Italy, using Auster AOP Mk5 aircraft, was to lead the fight in Northern Italy. However, in early 1947, following a move to Qastina, Palestine, 1907 Flight was disbanded and its personnel absorbed into 651 Squadron. Because of the Malayan Emergency, 656 Squadron, and with it 1907 Flight, was re-instated at ARF Sembawang on 15 July 1947. It deployed to Noble Field, Kuala Lumpur with the Auster AOP Mk5. The Flight remained as an Air Observation Squadron until 1952 when it was equipped with the Auster Mk6 and became a Light Liaison Flight. Staffed mainly by pilots of the glider pilot regiment, the Flight enjoyed various periods in Simang, Benta and Taiping. September 1957 saw the formation of the modern day Army Air Corps and 1907 Flight, still part of 656 Squadron, was re-named 7 Reconnaissance Flight and equipped with the Auster Mk7. In 1962, following the centralisation of 656 Squadron at Kluang, 7 Flight Army Air Corps was born. From December that year until 1966, now equipped with the Scout AH1, the Flight moved between Terendak and Kuching in support of operations in the Borneo Confrontation. The Flight was disbanded in 1967. However, an Air Platoon of the 2nd Keo Gurkha Rifles, operating Sioux helicopters, remained in existence. The Flight was re-formed in Berlin as 7 Aviation Flight in April 1970 equipped with Sioux. It was re-titled 7 Flight Army Air Corps again on 1st January 1973. The Flight in Berlin latterly operated Gazelle AH1â€™s until its disbandment in April 1994. In 1972 the Gurkha Air Platoon became â€˜Câ€™ Flight 656 Squadron, which at the time, was located in Hong Kong. â€˜Câ€™ Flight remained in Brunei at Scout Base, Seria. In 1977, being the last Army Air Corps unit to operate the Sioux, â€˜Câ€™ Flight was re-equipped with the Scout AH1. During 1978, 656 Squadron was re-numbered as 660 Squadron. â€˜Câ€™ Flight, however, remained a detached flight and in 1994, following the disbandment of 660 Squadron, became fully independent. On 1 September 1994, â€˜Câ€™ Flight was re-named 7 Flight Army Air Corps, flying the last Scout helicopters to be operated by the British Army. They were replaced with Bell 212 helicopters to continue their support to the British Army Jungle Training in Brunei. 7 Flight AAC moved from Scout Base to a temporary home at Medicina Lines in December 2007. The Flight will remain at Medicina Lines for the immediate future until a new permanent base is found.