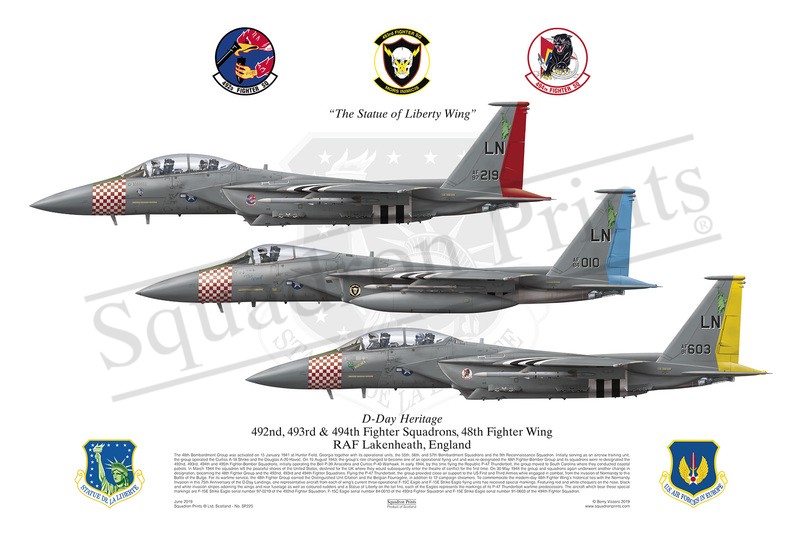 Squadron Prints Lithograph No. SP225 - D-Day Heritage, 492nd, 493rd and 494th Fighter Squadron, 48th Fighter Wing, RAF Lakenheath, England. The 48th Bombardment Group was activated on 15 January 1941 at Hunter Field, Georgia together with its operational units, the 55th, 56th, and 57th Bombardment Squadrons and the 9th Reconnaissance Squadron. Initially serving as an aircrew training unit, the group operated the Curtiss A-18 Shrike and the Douglas A-20 Havoc. On 15 August 1943, the groupâ€™s role changed to become one of an operational flying unit and was re-designated the 48th Fighter-Bomber Group and its squadrons were re-designated the 492nd, 493rd, 494th and 495th Fighter-Bomber Squadrons, initially operating the Bell P-39 Airacobra and Curtiss P-40 Warhawk. In early 1944, by this time flying the Republic P-47 Thunderbolt, the group moved to South Carolina where they conducted coastal patrols. In March 1944 the squadron left the peaceful shores of the United States, destined for the UK where they would subsequently enter the theatre of conflict for the first time. On 30 May 1944 the group and squadrons again underwent another change in designation, becoming the 48th Fighter Group and the 492nd, 493rd and 494th Fighter Squadrons. Flying the P-47 Thunderbolt, the group provided close air support to the US First and Third Armies while engaged in combat, from the invasion of Normandy to the Battle of the Bulge. For its wartime service, the 48th Fighter Group earned the Distinguished Unit Citation and the Belgian FourragÃ¨re, in addition to 12 campaign streamers. To commemorate the modern-day 48th Fighter Wingâ€™s historical ties with the Normandy Invasion in this 75th Anniversary of the D-Day Landings, one representative aircraft from each of wingâ€™s current three operational F-15C Eagle and F-15E Strike Eagle flying units has received special markings. Featuring red and white chequers on the nose, black and white invasion stripes adorning the wings and rear fuselage as well as coloured rudders and a Statue of Liberty on the tail fins, each of the Eagles represents the markings of its P-47 Thunderbolt wartime predecessors. The aircraft which bear these special markings are F-15E Strike Eagle serial number 97-0219 of the 492nd Fighter Squadron, F-15C Eagle serial number 84-0010 of the 493rd Fighter Squadron and F-15E Strike Eagle serial number 91-0603 of the 494th Fighter Squadron.