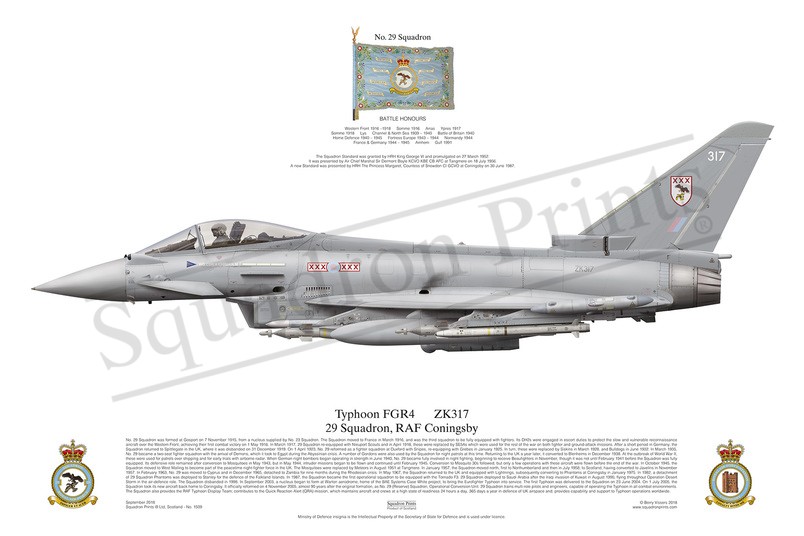 Squadron Prints Lithograph No. 1509 - ZK317, Typhoon FGR4, 29 Squadron, RAF Coningsby. No. 29 Squadron was formed at Gosport on 7 November 1915, from a nucleus supplied by No. 23 Squadron. The Squadron moved to France in March 1916, and was the third squadron to be fully equipped with fighters. Its DH2s were engaged in escort duties to protect the slow and vulnerable reconnaissance aircraft over the Western Front, achieving their first combat victory on 1 May 1916. In March 1917, 29 Squadron re-equipped with Nieuport Scouts and in April 1918, these were replaced by SE5As which were used for the rest of the war on both fighter and ground-attack missions. After a short period in Germany, the Squadron returned to Spittlegate in the UK, where it was disbanded on 31 December 1919. On 1 April 1923, No. 29 reformed as a fighter squadron at Duxford with Snipes, re-equipping with Grebes in January 1925. In turn, these were replaced by Siskins in March 1928, and Bulldogs in June 1932. In March 1935, No. 29 became a two-seat fighter squadron with the arrival of Demons, which it took to Egypt during the Abyssinian crisis. A number of Gordons were also used by the Squadron for night patrols at this time. Returning to the UK a year later, it converted to Blenheims in December 1938. At the outbreak of World War II, these were used for patrols over shipping and for early trials with airborne radar. When German night bombers began operating in strength in June 1940, No. 29 became fully involved in night fighting, beginning to receive Beaufighters in November, though it was not until February 1941 before the Squadron was fully equipped. Its defensive role remained after conversion to Mosquitoes in May 1943, but in May 1944, intruder missions began to be flown and continued until February 1945. Conversion to Mosquito 30s followed, but only a few operations with these aircraft were flown before the end of the war. In October 1945, the Squadron moved to West Malling to become part of the peacetime night-fighter force in the UK. The Mosquitoes were replaced by Meteors in August 1951 at Tangmere. In January 1957, the Squadron moved north, first to Northumberland and then in July 1958, to Scotland, having converted to Javelins in November 1957. In February 1963, No. 29 was moved to Cyprus and in December 1965, detached to Zambia for nine months during the Rhodesian crisis. In May 1967, the Squadron returned to the UK and equipped with Lightnings, subsequently converting to Phantoms at Coningsby in January 1975. In 1982, a detachment of 29 Squadron Phantoms was deployed to Stanley for the defence of the Falkland Islands. In 1987, the Squadron became the first operational squadron to be equipped with the Tornado F3. 29 Squadron deployed to Saudi Arabia after the Iraqi invasion of Kuwait in August 1990, flying throughout Operation Desert Storm in the air-defence role. The Squadron disbanded in 1998. In September 2003, a nucleus began to form at Warton aerodrome, home of the BAE Systems Case White project, to bring the Eurofighter Typhoon into service. The first Typhoon was delivered to the Squadron on 23 June 2004. On 1 July 2005, the Squadron took its new aircraft back home to Coningsby. It officially reformed on 4 November 2005, almost 90 years after the original formation, as No. 29 (Reserve) Squadron, Operational Conversion Unit. 29 Squadron trains multi-role pilots and engineers, capable of operating the Typhoon in all combat environments. The Squadron also provides the RAF Typhoon Display Team; contributes to the Quick Reaction Alert (QRA) mission, which maintains aircraft and crews at a high state of readiness 24 hours a day, 365 days a year in defence of UK airspace and; provides capability and support to Typhoon operations worldwide.