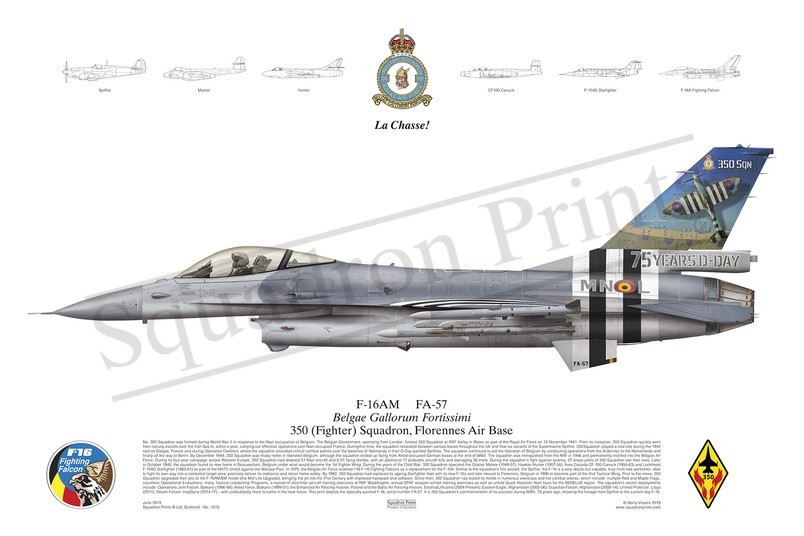 Squadron Prints Lithograph No. 1513 - FA-57, F-16AM, Belgae Gallorum Fortissimi, 350 (Fighter) Squadron, Florennes Air Base. No. 350 Squadron was formed during World War II in response to the Nazi occupation of Belgium. The Belgian Government, operating from London, formed 350 Squadron at RAF Valley in Wales as part of the Royal Air Force on 12 November 1941. From its inception, 350 Squadron quickly went from convoy escorts over the Irish Sea to, within a year, carrying out offensive operations over Nazi-occupied France. During this time, the squadron relocated between various bases throughout the UK and flew six variants of the Supermarine Spitfire. 350 Squadron played a vital role during the 1942 raid on Dieppe, France and during Operation Overlord, where the squadron provided critical combat patrols over the beaches of Normandy in their D-Day painted Spitfires. The squadron continued to aid the liberation of Belgium by conducting operations from the Ardennes to the Netherlands and finally all the way to Berlin. By December 1944, 350 Squadron was finally home in liberated Belgium, although the squadron ended up flying from Allied-occupied German bases at the end of WWII. The squadron was relinquished from the RAF in 1946 and permanently instilled into the Belgian Air Force. During its four-year campaign across Western Europe, 350 Squadron had downed 51 Nazi aircraft and 6 V1 flying bombs, with an additional 17 probable aircraft kills and damaging 36 more. During the squadronâ€™s fight against tyranny, 27 brave pilots of 350 Squadron lost their lives. Later in October 1946, the squadron found its new home in Beauvechain, Belgium under what would become the 1st Fighter Wing. During the years of the Cold War, 350 Squadron operated the Gloster Meteor (1949-57), Hawker Hunter (1957-58), Avro Canada CF-100 Canuck (1958-63) and Lockheed F-104G Starfighter (1963-81) as part of the NATO shield against the Warsaw Pact. In 1975, the Belgian Air Force ordered 116 F-16 Fighting Falcons as a replacement for the F-104. Similar to the squadronâ€™s first aircraft, the Spitfire, the F-16 is a very docile but capable, truly multi-role performer, able to fight its own way into a contested target area, precisely deliver its ordnance and return home safely. By 1982, 350 Squadron had replaced its ageing Starfighter fleet with its new F-16s and later moved to Florennes, Belgium in 1996 to become part of the 2nd Tactical Wing. Prior to the move, 350 Squadron upgraded their jets to the F-16AM/BM model (the Mid Life Upgrade), bringing the jet into the 21st Century with improved hardware and software. Since then, 350 Squadron has tested its mettle in numerous exercises and hot combat arenas, which include: multiple Red and Maple Flags, countless Operational Evaluations, many Tactical Leadership Programs, a myriad of dissimilar aircraft training exercises at RAF Waddington, annual EPAF weapon school training exercises as well as untold Quick Reaction Alert tours for the BENELUX region. The squadronâ€™s recent deployments include: Operations Joint Falcon, Balkans (1996-98); Allied Force, Balkans (1999-01); the Enhanced Air Policing mission, Poland and the Baltic Air Policing mission, Estonia/Lithuania (2004-Present); Eastern Eagle, Afghanistan (2005-06); Guardian Falcon, Afghanistan (2008-14); Unified Protector, Libya (2011); Desert Falcon, Iraq/Syria (2014-17) â€“ with undoubtedly more to come in the near future. This print depicts the specially painted F-16, serial number FA-57. It is 350 Squadronâ€™s commemoration of its success during WWII, 75 years ago, showing the lineage from Spitfire to the current day F-16.